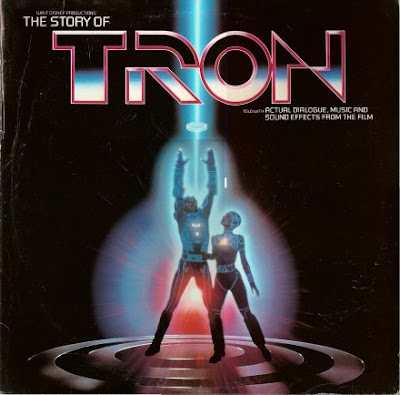 I ripped this one a long time ago and finally decided to listen to it again so I could comment on it.

In my defense, I bought this at Yesterday's Warehouse (used), which means I paid no more than a dollar for it. If I had bought it new, you would never know I have it because I would be way too embarrassed to admit it. I don't feel like getting up and hunting it down again to look up the actual release date--it's somewhere on the shelves in the other room with the rest of the collection--but it would have been released sometime soon after the movie itself. When I saw that blurb on the cover that it included music from the movie, I thought it might be a decent way to get a little of Wendy Carlos' music from that movie. No such luck. Any "music" is essentially no more than background noise.

This was an attempt to condense the movie into a 33-minute narration (plus using actual dialogue from the movie), but--and I cannot stress this enough--without any visuals. And let's face it: when this movie came out it was all about visual effects.

So, what's the point? Well, the point was that Disney knew all the Tron fans would buy anything that said "Tron" on it and they could make some money on it. Here's hoping they didn't make much, the greedy bastards.

I can't find any information about this on the internet, except one place where some guy uploaded mp3s of it and said something like "it's a very interesting take on the Tron story and makes for a very interesting listen." Poor guy. His concept of "interesting" must be several orders of magnitude more pedestrian than my own.

Now that I've finally listened to it, I can delete it and free up a few megabytes of disk space.
Posted by AlanDP at 7:41 PM