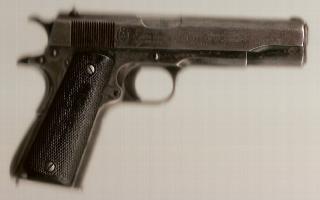 I suppose, like many gun owners, I had always wanted a Colt Model 1911. But the cost for such a gun was so high, I never seriously considered buying one. Until, that is, about 4 or 5 years ago when I discovered the pistol commonly referred to as the Sistema Colt. Here is some detailed historical information taken from Cruffler.com:

In 1927, the Argentine Commission for Foreign Acquisitions negotiated a contract with Colt for the manufacture of of .45 caliber self loading pistols specially marked and serial numbered in a separate series, and secured a licensing agreement giving the Argentine government the right to manufacture these pistols in Argentina. The agreement specified: 1) Colt would manufacture 10,000 Colt automatic pistols, caliber .45, Argentine Model 1927 for the Argentine Army, 2) that the complete knowledge base for future production of the pistols in Argentina, to include drawings, manufacturing instructions, material specifications, tool requirements, etc. would be transferred to Argentine control, and 3) that Argentine technicians would be trained in manufacturing operations and inspection.

In 1943, the Argentine Military Small Arms Factory (FMAP - Fabrica Militar de Armas Portatiles) began to prepare for the manufacture of Model 1927 pistols under the 1927 licensing agreement. These pistols were known as "Pistola Sistema 'Colt' Modelo Argentino 1927, Calibre 11,25mm"' Production began at the Esteban de Luca Arsenal in Buenos Aires, with the first pistols actually being assembled at the Domingo Matheu plant in Rosario, Argentina in 1945. The pistols were manufactured in accordance with Colt's 1927 drawings. They were exact copies of Colt's 1927 pistols (identical to US military M1911A1 pistols) except for very minor differences, and parts were interchangeable. The only noticeable differences were the markings, grips, black oxide bluing, a sharp edge on the rear of the hammer, and a sharp edge on the heel of the grip safety. Triggers were solid as on the 1927 Colts , and the checkering on the mainspring housing was changed from Colt type cut checkering to indented checkering.

Barrels on pistols issued to the Army had blued chambers, but the chambers on Navy, police, and commercial barrels were milled after being blued, which resulted in a bright unfinished surface comparable to Colt commercial barrels. Serial numbers were stamped on the barrels prior to bluing, and therefore, bluing remained inside the numbers.

The Sistema Colt pistols were made for the army, navy, air force, government bureaus, police organizations, and commercial sales. They were normally serial numbered on the right side of the receiver, the grip frame under the mainspring housing, on the top and right side of the slide, on the top of the chamber and the bottom of the magazine. The presence of an Argentine crest on the pistol indicates government issue; pistols without crests were made for local police, non-government agencies, commercial sales and export. All Sistema Colt pistols bear the marking D.G.F.M. - (F.M.A.P.) on the left side of the slide, which indicates manufacture by the Direccion General de Fabricaciones Militares at the Fabrica Militar de Armas Portatiles. A total of 88,494 Sistema Colt pistols were produced.

As you can see, mine was not "arsenal refinished." I do believe it was cleaned and checked for proper functioning, because it was clean and worked perfectly right out of the box. I have used both FMJ and a few different brands of JHP in it and it has always worked flawlessly. They sent 3 or 4 magazines along with it, but all but one were so battered I couldn't even get them into the gun. The one that does fit works perfectly, and a few extra mags from Cheaper Than Dirt also work just like they should.

I didn't buy it with the intention of using it as a carry gun, but if the occasion arose and I reached into my home pistol box, I would not hesitate to use this gun. It feels perfectly natural in my grip and always hits what I aim at. The only bad thing about it is, every time I shoot it, it makes me want to buy another one. That way I could leave one as is, and have one nicely refinished and tricked up with an ambidextrous safety and maybe a few other things.

I might also take this opportunity to remark that if you get tired of shooting paper targets, and start looking for other things to shoot with your .45, stay at least 15 yards away from targeted cowpies. Backsplatter can be quite dramatic if the pie is at the proper stage of semi-dryness.

(As usual, I must apologize for the poor quality of the picture).