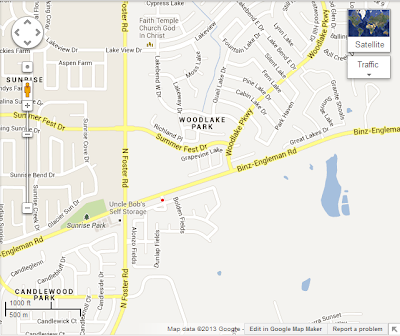 Here is a great example of the kind of weird, stupid stuff I have to deal with sometimes.  I did my regular cycle 14 route today, which covers a huge swath of area up Foster Road, down FM 78, and all kinds of stuff.  We had two "niners" on it.  I think I've explained niners before, but the short explanation is that they are new meters that have never been on the route before.

Well, we eventually found the two meters we were looking for, sort of.  By the way, a much more accurate description of the location would have been "near the intersection of Windfield Gap and Binz-Engleman."  By sort of, I mean that one of them was the right meter with no problems.  However, the other meter was a complete mess.  It was supposed to be a 2-inch meter, but it was in a huge vault that is usually reserved only for very large meters because they are connected to very large pipes.  Indeed, this vault had a very large (I'd guess an 8-inch) pipe in it, but the meter was on a very small bypass pipe and was only a 5/8-inch meter.  Also it had the wrong serial number.  The only thing that was correct about it was the manufacturer.  I wrote everything down about it that I could think might be important and turned it in to my supervisor, so now it's somebody else's problem.

Once, there was a large meter that suddenly disappeared.  I mean, it had just been removed so that there was only a straight pipe.  This happens occasionally, but it's usually just a plain old residential meter and it's because someone decided they'd be sneaky and get rid of the meter because they think this way they can get free water (they don't).  However, this was a large industrial pipe at a big company and I didn't think they were doing anything stupid like that.  I kept skipping it and turning it in as a straight connection, and my "superiors" kept telling me it was still there.  Eventually they even gave me a map of where it was, as if I was some kind of imbecile.  This made me snap a little, and I and my supervisor had a rather heated exchange about it.  "I've been reading this route every month for 5 years, and I know where every single meter is.  But that one is not there anymore," I told him.  So finally, and this was after about 7-8 months, an "investigator" was sent out to "investigate."  (P.S.  Don't even get me started on investigators).  The investigator discovered...that the meter was gone.  It took a few more months to get all worked out, but eventually someone discovered that someone else in the company had decided to make this pipe a fire line and therefore the meter was removed.  Whoever that person was hadn't bothered to inform anyone else in the company about the decision.

Rant mode off...for now.
Posted by AlanDP at 7:23 PM No comments: Links to this post 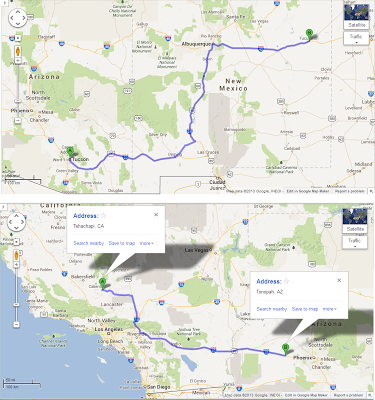 A song that I've liked for a long time popped into my head today for no particular reason--or for a reason that I was not conscious of.  So of course I looked it up and strummed through it a few times while singing as is my wont these days.

While looking these towns up to see where they actually are, I discovered that there is also a Tonopah in Nevada.  But since I've actually driven almost that exact route in the bottom map before, I decided to use the one in Arizona.  I must've driven through Tonopah, AZ quite a few times without noticing it.  I probably just thought it was part of Phoenix.  I must've driven through Tucumcari a few times, too.

And Winslow.  Made a lot of drop & grabs in Winslow.  But that's a different song.
Posted by AlanDP at 8:29 PM No comments: Links to this post

4 Commonplace Technologies That Every Movie Still Gets Wrong.

They missed one, which has always aggravated me because I like to get aggravated about inconsequential things.  I noticed this one all the time back before cell phones in the Age of Pagers.

I should point out that pagers are still in use, mostly in a single industry:  that is, the medical industry.  Hospitals still use pagers to call doctors in hospitals because they can just page them with the location they need to get to.  Back when I used to work on pagers, we occasionally worked on voice pagers and we would test the audio by simply opening the door to our Faraday cage and listening to hospital transmissions to see if they sounded good.  I mention this because I've recently been watching Scrubs on Netflix and although this show was made after the Age of Pagers was pretty much good and gone, the doctors on that show all carry the Bravo Plus.  This was a numeric pager made by Motorola and was the best pager they ever made.  It was probably the best pager ever made by anyone.  You can see a picture of one here.  By the way, God help you if you ever got hold of something in the Advisor family (original Advisor, Advisor Gold, Advisor Elite--especially the Elite--man, if you got one of those you were frikkin' doomed--here's a photo of one during one of its brief spasms of actually powering on).  The LX was one of the last generations of numeric pagers and wasn't completely horrible, but they were nothing like the Bravo Plus.  The LS350 was total junk.

Anyway, the thing they get wrong is this.  Whenever someone on a TV show/movie gets a page with the ubiquitous Bravo Plus, the sound effect we hear is not a page alert.  It is the power-up alert.  It still bugs me.  I've probably pointed it out to my wife at least 500 times.  She still hasn't left me.
Posted by AlanDP at 8:29 PM No comments: Links to this post


This is a song I downloaded some time ago and it's been there lurking in my mind and occasionally turning up in the shuffle.  I couldn't find the chords for it on ye olde internets so I'm taking a shot.  I think these are right.

And it is actually pitched in C.  Also the lyrics I found weren't all correct, so I believe I've corrected them.

(Female) (same chords)
Been working in Reno
Trying to get out
I've got a lonesome I worry about
It ain't the same feeling
As being alone
It's more how my lover's house ain't a home, no more.

The chords are the same pattern throughout.  Shouldn't be hard to figure out if anyone is looking for this.
Posted by AlanDP at 7:38 PM No comments: Links to this post

My daughter is a more voracious reader than I once thought (I've learned differently).  When she started to get into horror, I told her to read my Lovecraft books.  "I already have...one of them anyway."  I think she started with the wrong one and I'm still trying to get her to read some of the better stories.  Anyway, she recently became a fan of Sherlock, which can be streamed on Netflix.  Also, she totally has a crush on the guy who plays Sherlock, even though she won't just come out and admit it  ("he has the deepest voice I've ever heard!...he's just...ooohhhh").  I told her she should read the original stories.  "Do you have them?" she asked.  I handed her my two volume set of the complete Sherlock.  So she is now reading Sherlock Holmes.  Yes.

I've been trying to talk her into reading some of my fantasy collection, but she doesn't seem to be all that interested in fantasy.  I'd think a teenage girl should really like all the Dragonriders of Pern books (especially since many of them have prominent female protagonists), but I haven't been able to get her to read even that yet.

P.P.S.  I remember reading her Lovecraft's "The Festival" when she was 5 years old or so, paraphrasing some of the more difficult language so she could more easily understand it.  She loved it.
Posted by AlanDP at 7:53 PM No comments: Links to this post

Today I decided that rather than just bum around the house all day, we'd go to the Witte Museum to see what we could see.  Here are a few pix and one video from my phone. 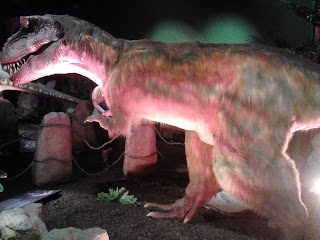 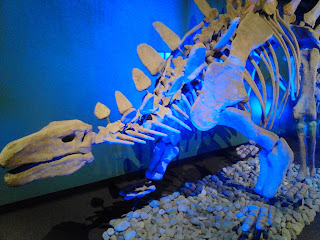 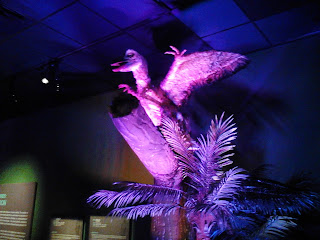 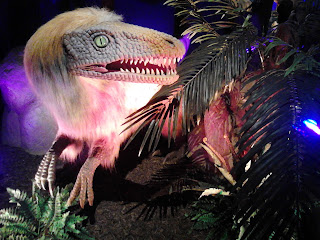 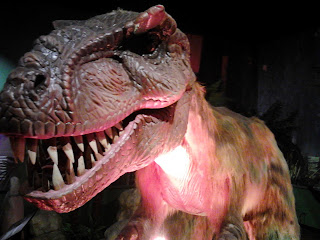 We will have to do this more often.  I think next time we're all off on a Saturday we might hit the Institute of Texan Cultures.  I haven't been there since I was a kid.
Posted by AlanDP at 6:24 PM No comments: Links to this post