I followed this link: When Being a Good Guy Isn't Enough at The Sight from Xavier's blog. It is a very well-written, well-thought out commentary on two men who tried to stop a couple of crazy shooters. The men were Mark Allen Wilson of Tyler, Texas, who was killed; and Brendan McKown of Tacoma Washington, who was severely injured. I have already made some brief, inadequate comments on both of these men on this blog, and can only recommend that you go read the link shown above. I wanted only to add that what I saw at the bottom of this article brought tears to my eyes, and I will quote it in full. 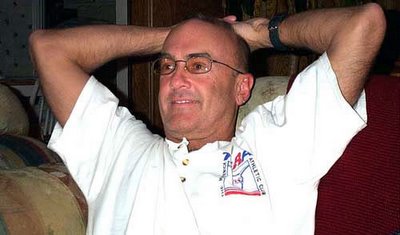 WHEREAS, The tragic death of Mark Alan Wilson of Tyler on February 24, 2005, at the age of 52, has brought a profound loss to his many friends and loved ones; and

WHEREAS, With instinctive courage and selfless resolve, this valorous Texan confronted a gunman on the steps of the Smith County Courthouse; reacting to the kind of inhuman crisis that compels ordinary men to seek cover or flee, Mark Wilson proved to be an extraordinary man; and

WHEREAS, Mr. Wilson confronted a lethal threat in order to protect the people of his community, and in his valiant attempt to save the lives of others, he risked his own safety; and

WHEREAS, The magnitude of the sacrifice that ended his life all too prematurely is in keeping with the character that was evident to all who knew him; an active member of the Tyler community, he used his time on earth to the fullest; and

WHEREAS, Born on January 20, 1953, in Dallas, Mr. Wilson graduated from MacArthur High School in 1971 and went on to serve his country with distinction in the U.S. Navy; after his discharge from the military, this avid sportsman worked as a racquetball instructor and embraced his ntrepreneurial spirit, opening Tyler's On Target Shooting Range in 1997; and

WHEREAS, A dedicated volunteer, he committed his talents to help raise money for nonprofit organizations and lent his time to Heart of Tyler/Main Street projects, including the Texas Blues Festival and Festival on the Square; and

WHEREAS, Mark Wilson was a true hero, and his example reminds us that the very best elements of human nature can emerge in the midst of the chaos and violence that threaten our society; though this brave man will be missed, his legacy will continue to inspire all who are privileged to know of him; now, therefore, be it

RESOLVED, That the House of Representatives of the 79th Texas Legislature hereby pay special tribute to the life of Mark Alan Wilson of Tyler and extend deepest sympathy to the members of his family: to his parents, Alex and Lynn Stewart; to his sisters, Melody and Holly Wilson; to his nieces, Katie and Kristen DeFazio; and to his other relatives and many friends; and, be it further

RESOLVED, That an official copy of this resolution be prepared for his family and that when the Texas House of Representatives adjourns this day, it do so in memory of Mark Alan Wilson.

Speaker of the House

Maybe it's only a small attempt at showing this man some respect. It won't bring him back, and I'm sure his family would prefer that he still be alive rather than receiving this memorial. But this is news that should be spread far and wide, so that maybe somewhere, someone will read it and come to understand the awesome task that has been taken on by those who have come to know that there is evil in this world, and that desperate measures must sometimes be taken to stop it.