The Gate and the Key 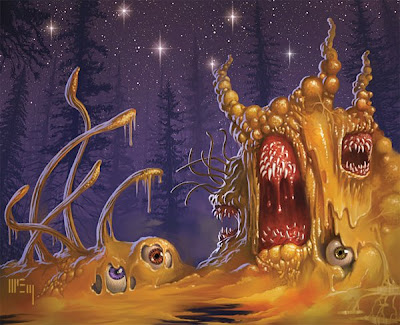 In keeping with my unannounced custom of posting some Cthulhuian graphic every weekend, here is an artist's rendition of Yog-Sothoth. I don't know who the artist was, since the site I found it on didn't credit him/her either.

Yoggy is one of the more interesting Outer Gods, to me. It is the only one besides Nyarlathotep to have more than one form. It's other form is known as 'Umr at-Tawil, or Tawil at-'Umr. In this latter form it appears to be humanoid and is capable of interacting with humans in a not totally malevolent way. It is also said to be "coterminous with all time and space." It seems ripe for use in Lovecraftian sci-fi, yet seems to me to not be exploited for such use as often as it could have been.

The above graphic is not entirely accurate to Lovecraft's original description of it as being "a congeries of iridescent globes." Still, it's a pretty good picture, I think.
Posted by AlanDP at 9:47 PM