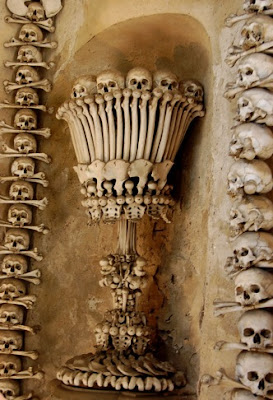 It is easily the best manifestation of Memento Mori in the world. The meaning of Memento Mori, "Remember that you will die" is impossible to forget in a room centered with a chandelier composed of every bone in the human body, and then some. To look up at the swooping strands of jawbones and sections of spine is to be one with the feeling of Memento Mori.

The 40,000 skeletons within Sedlec Ossuary in the Czech Republic welcome you with, quite literally, open arms. D and I travelled to the Czech Republic and had the pleasure of seeing this truly unique sight in the flesh, or bone, as it were. Known to most as "The Bone Church", unlike your every day ossuary, the Bone Church is not merely a home for the deceased. Instead of resting eternally in neat piles, the bones of the dead have become the medium of some of the world's most macabre art. In addition to the splendid bone chandelier, the ossuary displays two large chalices, four baroque candelabras, six enormous pyramids, two monstrances (a vessel used to display the Eucharistic Host), a family crest, and is topped off with skull candleholders, statues of angels holding skulls, and festively looping chains of bone at every corner like crete paper at a birthday party.

So I've gone through a bunch of newsfeeds and blogs and can't find anything that I can add something new to or say something insightful about. Maybe I'm suffering burnout. So forgive me if I start wandering down some shadowy paths into other areas that I think are absolutely fascinating.

Follow the above link for more info and more pix. This amazing ossuary (how about that, the spell-checker doesn't know "ossuary") is not just a collection of bones, but a monument to the human skeleton as an artistic medium. And it was begun 800 years ago.
Posted by AlanDP at 6:50 PM