The miniature art of David Kucer 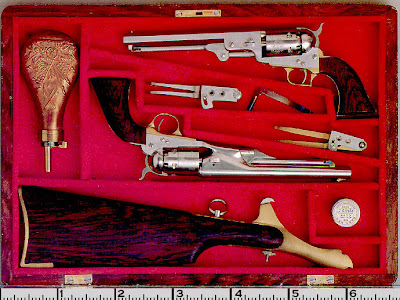 It is important to place David Kucer’s work into an historical perspective. Miniature firearms were the invention of the Renaissance. Their appearance coincided with the acceptance by the aristocracy of the wheel-lock. Wheel-lock arms were complex and costly, their manufacture requiring highly specialized and advanced technical skills. What was true of full scale firearms was equally true of miniature wheel-lock guns which were made in the 1500s and early 1600s. Miniature firearms were the most extreme test of the abilities of the virtuoso metal-smiths. They equaled in their demands upon the abilities of their makers the most intricate and delicate achievements of goldsmiths and jewelers. In addition, they were an extension of Late Renaissance and Mannerist fascination with small scale works of art such as the bronze statuette, plaquette, and medal.

In his notes for the catalogue of the Kucer exhibition at the Royal Armouries of H.M. Tower of London, Howard L. Blackmore refers to Michael Mann of Augsburg (he died c.1630), who made both miniature caskets and miniature firearms. For artists like him, the careful making of miniature arms was an extension of a whole, complex field of decorative arts and applied technology. There was in a sense no real separation of art and science; they were part of the same phenomenon of human development.

It is appropriate that in the Royal Ontario Museum, David Kucer’s miniature firearms were put on display contiguous to masterpieces of Medieval, Renaissance, and Baroque silver and goldsmiths’ work, to which they are in no way inferior.