I don't remember how I acquired this book. I know that I was still quite young, but I don't remember who gave it to me or if it was a special occasion such as a birthday or Christmas. It's just a book that I've had for a long time. I could say that it's one of my favorite children's books, but that wouldn't be entirely accurate. It is one of my favorite books. Period. 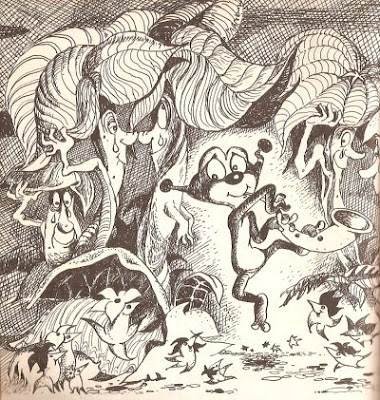 Twyllyp is a Xyzrbian. That's him, playing the flugel. He plays sad songs for the Frubuns (those are not trees, they are Frubuns) so that they will weep and water their roots. But other than the Frubuns, no one else on Xyzrb really likes Twyllyp very much. Everyone makes fun of him because he's old enough that he shouldn't have to talk with his mouth anymore, but still does because he was born with a bent left talkstalk.

Twyllyp is profusely illustrated with black & white line drawings such as the ones I've scanned here. Each page shows a rich and playful imagination on the part of the authors (Farrow was also the illustrator). It is the story of a young Xyzrbian who is recruited by a Wikit for an expedition to a planet where intelligent life is suspected to exist. Twyllyp is not terribly smart, but the Wikit chooses him because he is kinder than he is smart. As one of the Wikit's mottoes states: SMART IS SMART BUT KIND IS SMARTER. 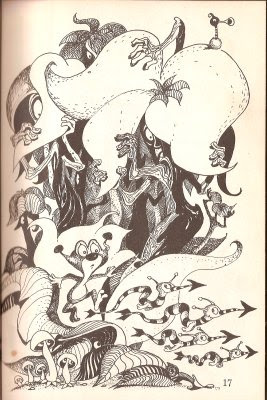 Roughly the last half of the book deals with Twyllyp's adventures on the newly-discovered planet (which is, of course, Earth), but the beginning gives us fascinating glimpses of the various lifeforms of Xyzrb. Here Twyllyp is following Arrows, because on Xyzrb it is always wise to follow Arrows. If you don't, they get behind you and push with their very sharp noses. 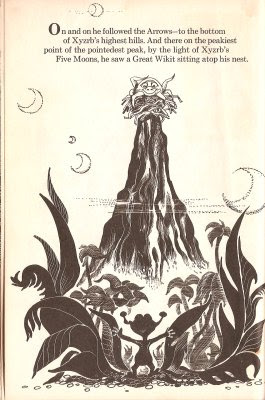 "On the peakiest point of the pointedest peak." This image has been firmly embedded in my memory for nearly forty years now, and I think of it every time I see a mountain.

There are also creatures called Pokwokets, which look like socks with legs, and which are employed by most Xyzrbians to carry things. But none of them want to work for Twyllyp because he is so universally ridiculed:

"No self-respecting Pokwoket would want to be a Pokwoket to you!" they sniggled, and ran away in forty-six directions.

Forty-six directions. Another image that has stayed in my mind since I was a small child. 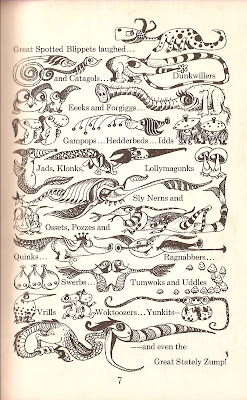 Here is a page that I scanned in larger resolution (click to enlarge) because it lists an A to Z of many of the creatures of Xyzrb. Well, "A" is on the previous page, a string-like creature called an Aggle. A few of these beings are mentioned again later in the book. For example, we later learn that the Sly Nern is not only sly, but "terrible" and "whipsnapping."

Twyllyp's only knowledge of Earth is gained from listening to commercial radio stations as he flew through space, which leaves him quite befuddled and confused after crash-landing. But by following the wisdom imprinted on the Wikit's mottoes, he manages to get by and even make friends for the first time in his life.

I don't really know anything technical about illustrating. But the illustrations in this book, despite having the apparent limitation of black & white, are sweeping and broad in their ability to show action, mood, and life in general.

My kids love this book. I've read it to them several times (a complete read-through takes about 45 minutes, mostly because the illustations are so wonderful to behold). It is no longer in print. If you stumble across one in a used book store, buy it. There are currently three available through Amazon, but it has become somewhat collectible and prices start at $25.
Posted by AlanDP at 2:41 PM