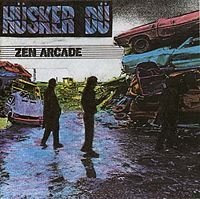 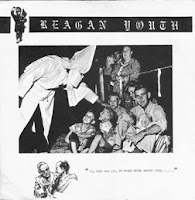 I know I mentioned it several days ago already, but I finally got around to ripping Zen Arcade today. You might be scratching your head over the other one.

Well, if you really want all the details, you can look up "Reagan Youth" at Wikipedia. They did not use these images to promote racism, in fact, they used images like this as a means of irony and satire. A dub of this very short (EP) record was tucked away at the end of side 1 of the Zen Arcade tape, because long ago when I made that tape I wanted it somewhere for easy access, just in case, but it wasn't big enough to take up a tape of its own. Back when I bought it, there was no one in the store who could give me any information about it, not even the manager apparently. Back in the 80s I think I knew what was in that Hastings better than anyone who worked there. And yet, they wouldn't hire me even though I applied several times. I remember once I was in there and an older lady, not the generation that you normally saw looking for music in a Hastings, asked one of the drones if they had Handel's Messiah. The drone wiped a gob of spittle from his chin and answered, "Is that a group, or what?" (Note: The spittle incident was added for dramatic effect--otherwise this is a true story). Egads. I showed her which section it was in. "Do you work here?" she asked. "No," I said, "I just hang out here a lot so there will be someone here who knows what the heck is going on." But I digress.

Literally decades went by and I occasionally thought about this record (I hesitate to call it an "album"), and the same questions kept coming to my mind. One: Who the heck were they? Two: How in the heck did they ever manage to cut a record? This record is punk. Nothing else. And not really very good punk, like, say, the Sex Pistols. But apparently they were quite popular in the punk scene, which I observed only as a mildly interested outsider. So now that we have the internet and Wikipedia, I know who they were and how they managed to cut a record. Yet still, one question remains: How in the heck did their record ever end up in a Hastings in Seguin, Texas?

And it was the only one. After I bought it, it was never replaced.
Posted by AlanDP at 6:36 PM