Commentary on Dagon by Fred Chappell 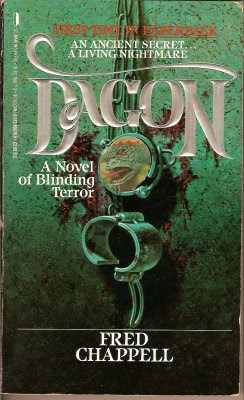 Does anyone besides me think this book sucks? I don't mean it sucks in a good way, by being a book that's so bad it's fun to read. I mean a book that totally and completely, without any equivocation, sucks. In fact, I'm going to have to create a brand new category and this book is going to be first thing to go in it: BOOKS THAT SUCK.

"A novel of blinding terror." Pffft! It should say, "A novel of unimaginably stupifying boredom." Except I don't have to imagine it. I read it.

This guy marries this woman he has the hots for, because she totally dominates him and that's the kind of sex he's always wanted but never had. Once they're married, the sex stops, for him anyway. But still he sticks around like a total wuss, even though she's messing around with some other guy right in front of him, on the slight chance that someday she may deign to once again perhaps have sex with him. Maybe. Yes, he sticks around, although the woman treats him like **** and is a flat-chested, chinless fish-face. No offense to flat-chested, chinless, fish-faced women who by the way aren't entirely technically human and who just might have been born in an obscure town on the coast of Massachusetts, but come on, my disbelief can be suspended only so far. So anyway, eventually he goes totally bat-spit insane.

There. Now you don't have to read it. You may feel free to thank me.
Posted by AlanDP at 5:33 PM