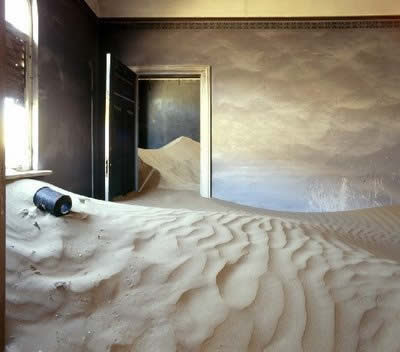 Oddee has a some info and poignant photos of 10 Most Amazing Ghost Towns. The above photo is from Kolmanskop, which is being reclaimed by the Namibian desert where it was built 100 years ago as a diamond-mining town. This photo strikes me as being both sad and beautiful, like an unfinished painting by Dalí. Doesn't it?

Also interesting was the city of Kowloon, which was abandoned by both the Chinese and British governments, and apparently taken over by squatters. It became a wretched hive of scum and villainy until it was torn down in 1993 by China and Britain.
Posted by AlanDP at 9:28 PM