I did not know this

Got an email from Amazon since I've purchased an mp3 or two from them. I learned that they have a lot of songs free for download. Most of the artists I've never heard of, but in the queue right now are "Take A Break Guys" from A Swingin' Christmas by Brian Setzer and "Paralyzed" from Body of Song by Bob Mould.

Mould was another member of Hüsker Dü. Ostensibly the "leader," (guitar and vocals) because he wrote most of the songs and therefore sang lead most of the time. Grant Hart was the drummer (and occasional vocalist) but could also play keyboards some, but back when they were a group (the third member was bassist Greg Norton), the record label didn't think keys were good for their "image," so they didn't let them record much that included piano or organ. Hart's Intolerance that I digitized yesterday has plenty of organ.

Hüsker Dü was one of my favorite bands back in the 80s. They never got so-called "mainstream popular," and they didn't play the kind of music that made it onto many radio stations back then. You know what I mean. I think maybe KISS in S.A. played a couple of their songs way back when. I got to know them via a co-worker who was big fan. 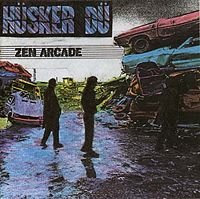 Anywho, Mould went on to form the group Sugar after Hüsker Dü broke up. I never got any Sugar albums, but I do have two of his solo albums. I like them both. I was pleased to discover my old cassette of Hüsker's Metal Circus when I was going through tapes the other day, but somehow I apparently managed to lose the original box with the cover photo. I'll have to check my records again, but I don't think I ever acquired Candy Apple Gray. I do have Zen Arcade (double LP), New Day Rising (LP), Flip Your Wig (LP), and Warehouse: Songs and Stories (CD). Until I just now checked their discography, I had never heard of their first LP Everything Falls Apart. Huh. The only two Mould solo albums I have are Workbook and Black Sheets of Rain. I remember a brief period of working at the pizza restaurant back when Rain came out, and everyone who worked in the kitchen was "cool." I brought in a jambox that played CDs and we listened to that album over and over. No bland, mainstream pop music for a few months, miraculously.

UPDATE: "Take a Break Guys" is an instrumental version of "God Rest Ye Merry, Gentlemen." From the Brian Setzer Orchestra, with lots of improvisation and screaming guitar.
Posted by AlanDP at 1:36 PM