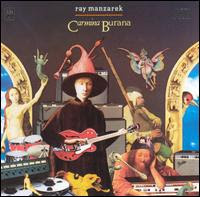 In 1803 a scroll of medieval poems was discovered in the German province of Bavaria among the debris of the secularized monastery of Benedikt-Beuren ("BURANA").

These lyrics, written primarily in Latin, were determined to be the work of renegade monks and wandering poets of the 13th Century. Their words captured a lost world of rebels and dropouts of the medieval clergy; hard lovers, drinkers, on the move, celebrating existence rather than living the meditative, celibate, cloistered life of the monastery.

In 1935 German comoser Carl Orff re-discovered the poems. Impressed with their meaning and rhythm he composed a catata utilizing the centuries old verses. He transformed the writings into invocations and profane chants accompanied by numerous instruments and magical representations.

--from the liner notes of Carmina Burana

Recorded in 1983, but I didn't find this tape until several years later. At the time I had never heard of Carmina Burana. I was only thinking, hey, something by Ray Manzarek, I'll buy it. What's left of the sticky label on the box looks like the kind of sticker Hastings used to use back in the 80s.

The sound quality is still amazingly good for a 25-year-old cassette.

Ask, and it shall be given: Carmina Burana with English translation. Here is "O Fortune."

O Fortune, like the moon of ever changing state, you are always waxing or waning; hateful life now is brutal, now pampers our feelings with its game; poverty, power, it melts them like ice.

Fate, savage and empty, you are a turning wheel, your position is uncertain, your favour is idle and always likely to disappear; covered in shadows and veiled you bear upon me too; now my back is naked through the sport of your wickedness.

The chance of prosperity and of virtue is not now mine; whether willing or not, a man is always liable for Fortune's service. At this hour without delay touch the strings! Because through luck she lays low the brave, all join with me in lamentation!