They should all be keelhauled

Richard Smith and Sharon Cooper from Stone in Staffordshire have postponed Morgan's sixth birthday while they await the outcome of their application.

Permission is required to fly anything other than national flags, a Stafford Borough Council spokesman said.

After a complaint the family were told they were in breach of planning laws.

The couple have paid £75 for the application.

"I wanted to show my friends the flag but now I've got to take my flag down and I'm sad," Morgan told BBC News.

The flag in question: 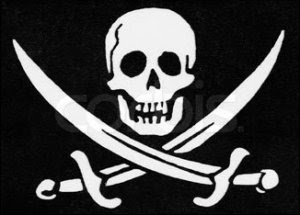 So congratulations to both the Staffordshire Borough Council and the complaining neighbors. You just taught a six-year-old boy why he should hate your overbearing, pompous nannyism. Maybe this will stop him from growing up to be just another serf.
Posted by AlanDP at 10:12 PM