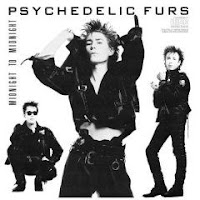 One of my old favorites. I know the Furs themselves didn't particularly care for this album, since it was too "commercial." I like it anyway. A lot of rock bands use horns in various ways, but often the horn only provides a solo through a bridge or fade-out, or perhaps it's the horn that gives a song its hook. I like this album because the horns are more than just a catchy accent or a (perhaps gratuitous) solo; they are incorporated into the overall big sound.

I know the Furs used horns in the same way on earlier albums, but it's on this one that they really nail it, in my opinion.

Next up: the album (by a different group) that provided The Big Synthesizer Hook of 1982. Take a guess, if you want.
Posted by AlanDP at 2:39 PM