Technology of the Living Dead 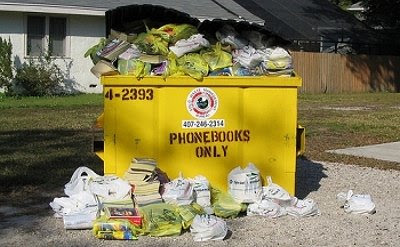 As in: technologies that are dead but haven't yet realized it. Cracked does it again with 6 Technologies That Don't Know They're Dead. Although written for humor, as usual, sometimes their articles contain some real information, and this is one of them. I thought the entry on phone books (photo above) was especially profound. Why are they still around?

Since you've probably never opened one, you may not realize that phone books are chock full of so many ads that they generated $13.9 billion last year. That sort of makes sense when you realize these ads are being force fed to every single household in America, like giant bricks of spam just appearing on your porch once a year. The only difference is you can click out of a pop up ad. Phone books weigh 10 lbs and have to be disposed of in special ways, to avoid becoming even more than 30% of your local landfill. Yes, it would appear that Satan works in advertising, and he's damn good at what he does.

Here's a little tidbit of personal trivia for you. Since we don't live actually in San Antonio, we don't get San Antonio phone books. But we, or my wife really, and some other people we know can really use S.A. phone books. So every year when they come out, I just pick them up from in front of vacant houses. Every house gets a phone book, no matter if someone lives in it or not, no matter if it has a phone in it or not, no matter if it's been condemned and is halfway demolished or not. I once saw a house that was in the process of being moved. Half of the house was already gone, half was still sitting there. They threw a phone book in the driveway anyway. (No kidding. My previous job, when I had to work on the south side a lot. I stood right there and watched them do it). In fact, many houses that do have people in them never pick up their phone book. It just rots in the driveway until somebody decides to toss it next to the garbage can on trash day. (P.S. I know which houses are really vacant because that's part of my job).

I almost never open a phone book. I especially hate looking for something in the Yellow Pages, because whatever I happen to be looking for is always nearly impossible to find. I usually have to hunt under 7 or 8 different categories before I find where they've pigeon-holed it. When I want to use the Yellow Pages, I just go to Yahoo.

I also thought this was a great quote:

How many of you read an actual newspaper this morning? Yeah, didn't think so. If you're reading this you know how to use the internet, and if you know how to use the internet then you have no reason in the world to read a newspaper unless you're sitting in the dark for refusing to pay your electricity bill. In that case, stop reading this and go get a job.

Several years ago a co-worker of mine at the time told me about how the S.A. Express-News had called him to try and get him to subscribe. He had two phone lines at the time: one for regular phone use and one for his internet connection. So he was online while talking with the solicitor. Every single thing they told him he could get from the newspaper, he just did a search for and found it online. And this had to be at least 8 years ago. He said the lady finally, sounding kind of desperate, said, "Well, you can get coupons in the newspaper!" So he typed in "coupons," and poof, there they were. Coupons ready to be printed out on his own home printer and taken to the store. He told her that. She hung up without saying another word.

Anyway, the Cracked article is some pretty good reading. Funny, too.
Posted by AlanDP at 4:13 PM