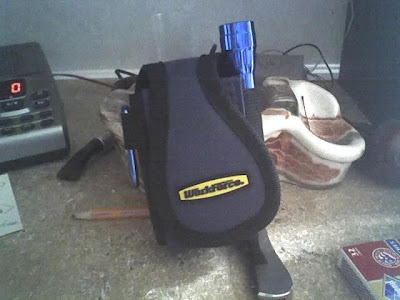 I saw a co-worker with one of these the other day and had to ask where he got it. Turns out Home Depot sells these for about $9 each. I went and bought two of them today, one for me and one for my wife. A cell phone holder that seems to be able to actually protect your phone from hard knocks, and the flap fastens with velcro so the phone doesn't work its way out. I've never trusted the sheath that came with my cell phone, so this was a good buy for me. Comes with a rinky-dink flashlight and one of those doohickeys that you can hang stuff on. I'll probably just get rid of that thing, I don't trust them enough to actually hang my keys on them. It has a sturdy belt clip on the back. Just thought there might be someone out there who could use one of these to replace the piece of junk pouch that came with their phone.

Pipe tool and other paraphernalia not included.
Posted by AlanDP at 3:10 PM