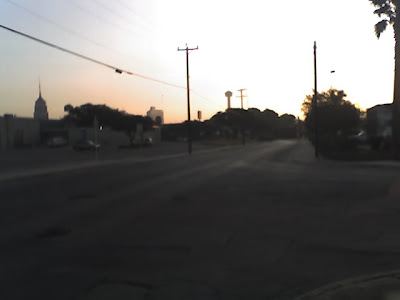 Here are some pix from today's work. Still early in the morning (7:17 AM), and the sun hadn't really risen yet, but here's the Tower of Americas in the distance. I don't remember exactly where I was when I took this about 15 minutes into the route. Maybe S. Santa Rosa. 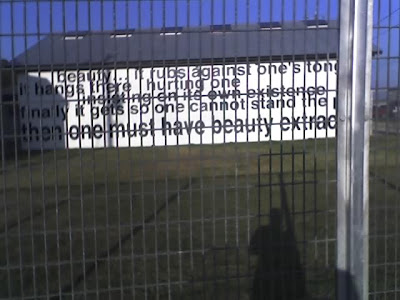 An hour later and I think this is on S. Flores. I don't know the story behind it, but it reminds me that downtown seems to have a higher concentration of artsy-fartsy types than any other part of the city. It says:
"beauty...it rubs against one's tongue
it hangs there hurting one
insisting on its own existence
finally it gets so one cannot stand the pain
then one must have beauty extracted"
Okay then. 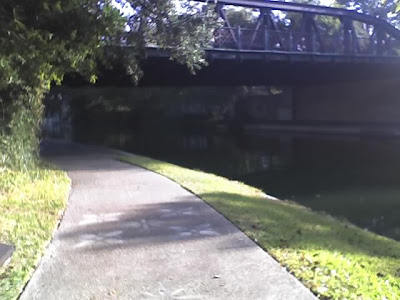 Here's a quiet spot on the Riverwalk near the intersection of East Arsenal and Washington. There's a meter inside a cabinet under the bridge. I think it may be part of the Riverwalk irrigation system. 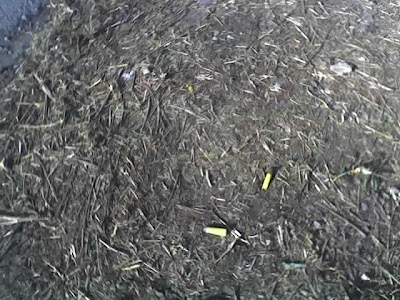 See anything familiar? The yellow things are some empty 20-gauge shotgun shells scattered on the ground on El Paso close to the intersection with S. Flores.

P.S. Today I saw a Via bus hang a jaw-droppingly audacious U-turn in a wide spot on South Flores that left me standing there in open-mouthed astonishment and not a little admiration. The driver must have learned to drive in Hazzard County or something.
Posted by AlanDP at 1:22 PM