Sailor on the Seas of Fate 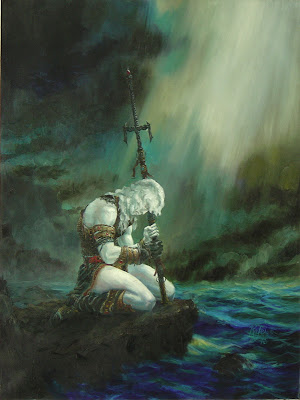 I don't read as much as I used to, but recently I thought I would try to get back into it by revisiting something I'd read before.

I have read the main Elric saga (the two trilogies) only once before, and it was many years ago. Sometimes I think I should have moved past this kind of literature by now, but I keep coming back to it. There is something in the tragedy conveyed by Moorcock's Eternal Champion tales that speaks to me. And the overall gloom that runs through the Elric tales matches my mood of late.

I think my favorite incarnation is Corum, possibly because his tales were the first I read long decades ago. To me it seemed that Elric went out looking for trouble, whereas Corum would have been happy to live out his life in peace and seclusion, but he and his family were violated. Therefore Corum is, to me, more tragic.

I made a cursory pass through my shelves last night and picked out several other Eternal Champion books. Maybe I'll just spend the next several months slowly working my way through them, with the standard diversion here and there to keep from getting bored. I have the Hawkmoon books as well, although his story did not seem as gripping to me the only time I read it. I never got much into Erekosë, although I do have one or two of his books. I also quite enjoyed Jherek Carnelian in The Dancers at the End of Time, which I always mention but which (to my surprise) I've noticed many Moorcock readers have never read. Jherek is more of a tragic-comic character, and is another incarnation of the Eternal Champion, though not obviously so.

I have attempted to read the Chronicles of Jerry Cornelius twice, but have run out of momentum and abandoned it both times. Maybe this time.
Posted by AlanDP at 6:54 PM