First I must say that this movie was so comment-worthy that I ended up with over 60 screen caps that I had to whittle down to these that I have uploaded. Deleting the ones that I did discard was not easy, but I just couldn't upload everything.

It was with a certain feeling of trepidation that I began watching this movie; indeed, a creeping sense of unease came over me even as I set the timer to record. The reason for this unease was that Dish Network's program guide summary showed John Wayne as the star of this film, and something about the star being a "singing cowboy." Surely, I thought, they must be mistaken. John Wayne isn't the star, they just listed him at the top because his name is now more well-known. But then I checked imdb and found that, indeed, John Wayne was the star, and he played a character called Singin' Sandy Saunders. I have not seen any of these really old John Wayne movies, and until now I had never heard of this character, which appeared in several movies, the singing always overdubbed. 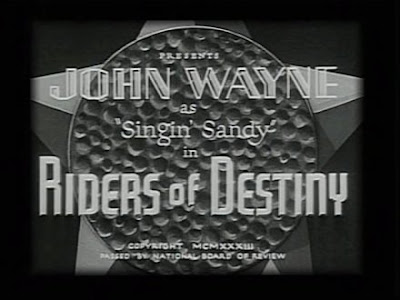 Riders of Destiny, 1933
Riders of Destiny makes me think that they had a couple of boxes filled with slips of paper, one with nouns, one with adjectives, and perhaps another with verbs and adverbs for variety.

"We need a title today!"

"How about two nouns?"

"Okie dokie. We got 'destiny.' We got 'riders.' That's pretty good: Destiny Riders."

The title has no relation to the movie. This is not unusual, but usually the title of a singing cowboy western is also the title of the movie's main song; it's "hit single," if you will. Not so with this one. And it seems quite a pretentious title for a story that's only about a local battle over water rights.

So there I was, an ominous feeling of dread creeping up the back of my neck at the thought of how painfully embarrassing it would be (although vicariously) to hear John Wayne try to be a singing cowboy. Fortunately, someone who could sing was used to overdub Wayne. His name was Bill Bradbury, brother of Bob Steele and son of director Robert Bradbury, Sr. Bill Bradbury had a short show-biz career, using it primarily as a way to make money to put himself through school. Once he became a practicing physician, he left show business. But enough about him. 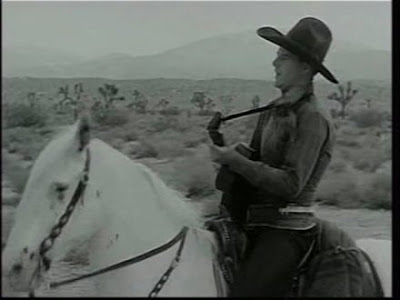 The movie begins with Sandy Saunders riding along and singing a song. A strange, ominous, minor-keyed song called "A Cowboy's Song of Fate." I have captured it for your edification here. Click to go to box.net where I have it stored and you can play it (544 kb mono mp3). Also his guitar sounds like a ukelele. Keep your eyes on that guitar. 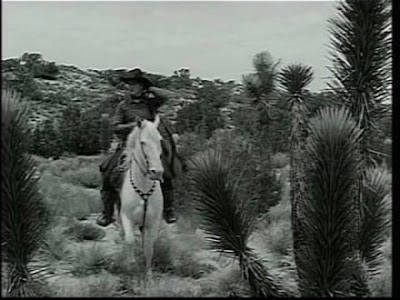 He finishes his song and sees something wrong in the distance. And here, at the 2:20 mark, we have the first of the dramatic musical flourishes that make sure we know something bad is going down. Just click through to listen to...DUMP DUMP DUMP DUMMMM!!! Remember the guitar, which is now slung over his shoulder. 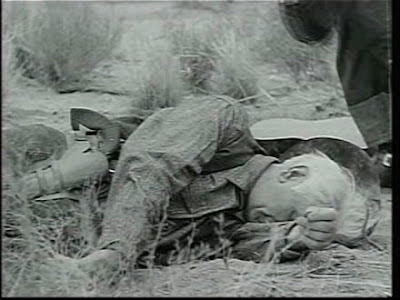 He finds Sheriff Bill Baxter (Lafe McKee), who has been shot in the back and left for dead. He stops to help. Note the guitar lying on the ground behind the sheriff. So he helps the sheriff out, says that he'll recover even though he was shot in the back, and then... 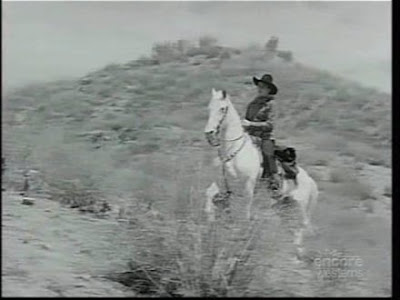 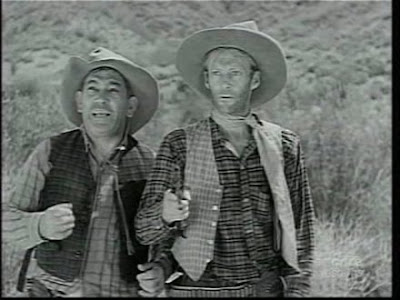 Henchman Elmer (left) and Henchman Bert (right) provide the comic relief. They are like Larry and Curly without Moe around to give them coherence and direction. Pay attention especially to the one on the right. That's Al St. Johns, a.k.a. Fuzzy St. Johns, a.k.a. Fuzzy Q. Jones. Another vaudevillian who made the move to movies, he is a standard henchman/sidekick in old cowboy westerns and was everywhere (he played the friendly outlaw Slim in the previously reviewed The Oklahoma Cyclone, but if I keep doing this we will definitely be seeing more of him). 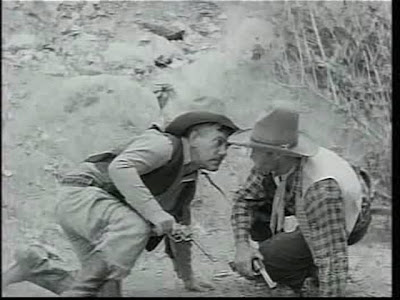 Click to enlarge the two pictures above and below. I wanted to get these two pictures in here so you could see Elmer's (Heinie Conklin) shootin' iron. Notice that it looks like the trigger is set well forward, like you would expect with a double-action, and his finger appears to be behind the trigger, gripping the back of the trigger guard. 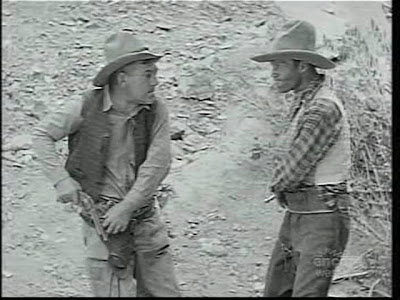 Here's another shot of him holding it the same way. Notice the strangely-shaped curve of the grips. Does it have a hammer? Strange-looking firearm. I wonder if it was even based on a real gun, or if it was some kind of toy.

So anyway, the stagecoach that Bert and Elmer are driving gets robbed. Bert makes an awesome shot and kills the robber's horse from about 100 yards away without even aiming (or holding the gun steady). Singin' Sandy arrives just in time to discover a damsel in distress, her horse dead, said damsel having just robbed the stagecoach. Sandy gives her his horse so she can make her escape. Confusing, yes, but you see, Sandy is not what he seems.

It turns out that Bert and Elmer are crooks working for the Main Bad Guy named Kincaid. The damsel, Fay Denton (played by Cecelia Parker) and her father had some stuff on the stagecoach, but they knew their stuff was being stolen. So she preemptively robbed the stagecoach to get their stuff before the real bad guys could steal it. 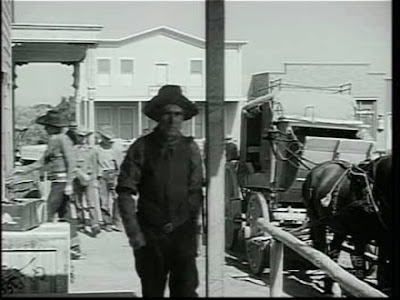 Gratuitous pipe smoking. There's a lot of it in this movie. 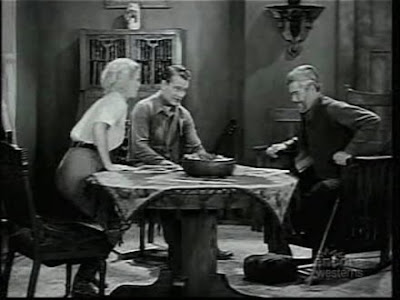 Singin' Sandy ends up at Fay's house, where she lives with her father (George pre-Gabby Hayes). The guitar has mysteriously appeared again! He becomes friends with them, of course, and it is only natural that Fay begins falling in love with him. 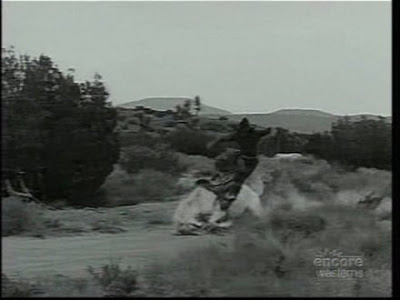 This is the kind of scene that makes me wince. Before CGI, before green screens, before pretty much everything. Bert and Elmer have set up a trip rope to catch Sandy. This is a horse grinding its nose into the dirt after being tripped. It nearly turns a somersault before it's over. Yow. 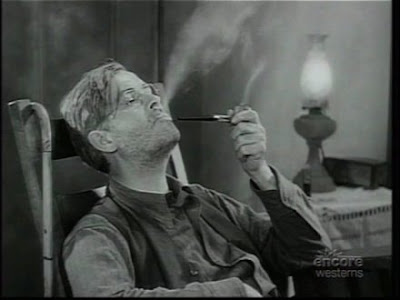 But they don't catch Sandy, in fact, Sandy catches them and returns them to their boss, leaving a snatch of his haunting refrain ("so drop [or is it "draw"] your guns, outlaw, and cinch 'em on tight/there'll be blood a runnin' in town before night") floating on the air and making Kincaid and his hired gun Morgan go WTF?! Singin' Sandy always sings a little to let people know he's there. Some people leave a chess piece, some a playing card, some people sing. Then Sandy goes back to the Denton's place for supper, during which Charlie (Fay's dad) recommends his daughter's biscuits (cough), and after which Sandy treats Fay to a romantic ballad while Charlie enjoys a pipe. 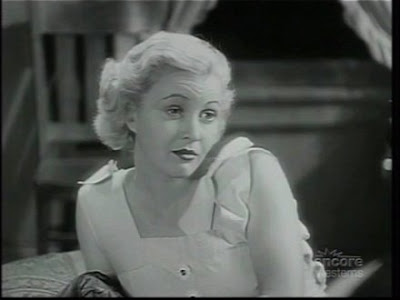 She's thinking, "I am disturbed by your surrealistic lip-synching and somewhat confused that your guitar sounds like a ukelele." 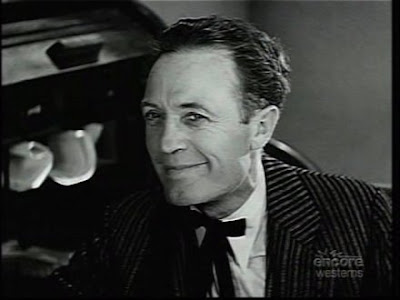 This is Kincaid, the bad guy. He is thinking, "Let us pause for a moment while I smirk knowingly." He did this a lot. Kincaid controls all the water, except for a well on the Denton's place. 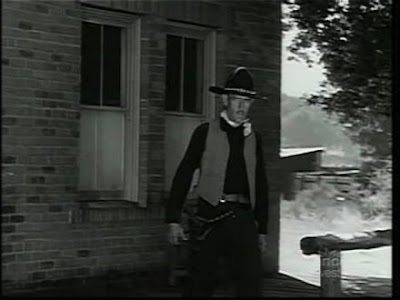 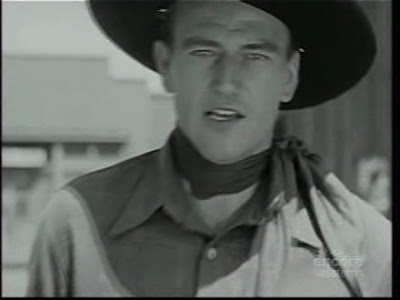 Sandy's singing. "There'll be guns a blazin'/And singin' with lead/Tonight you'll be drinkin'/Your drinks with the dead." Tough words for a guy who never kills anyone. 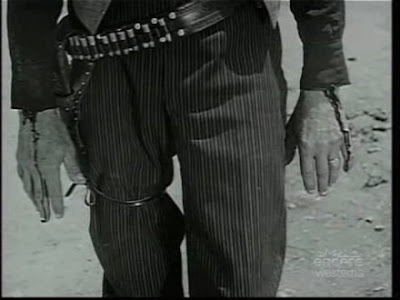 He just permanently disables Morgan by shooting him through both wrists so he'll "never handle a gun again." Doesn't do him much good. Morgan is later murdered in cold blood by Kincaid, in a fit of rage. 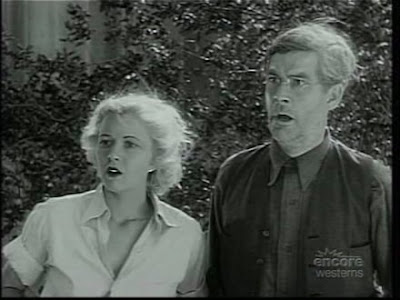 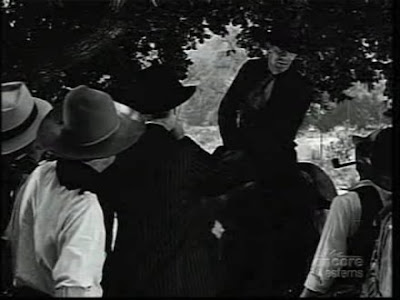 Stuff is going down, but not without gratuitous pipe smoking. 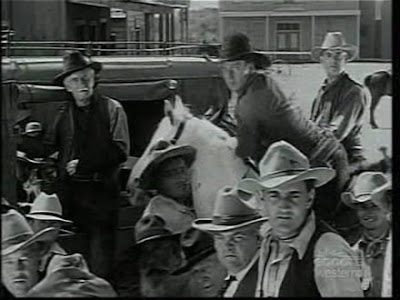 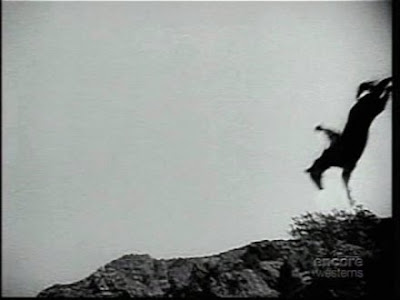 Another scene that makes me say ouch. That's a real horse with what appears to be a dummy attached, plunging from a 20-foot cliff into a pool of water. The horse survives, but is obviously injured in its right front leg when it clambers back out on the bank. The ostensible rider is Kincaid, who doesn't survive. He drowns. Yes, the water magnate drowns. Such sweet irony!

I left a lot of stuff out because I don't want to fill in too many spoilers. The primary plot of this one is "bad guy controls water." (Sub-plots: hero has secret identity; only the sheriff knows the truth). The answer to "should you watch this movie?" is: yes, absolutely. 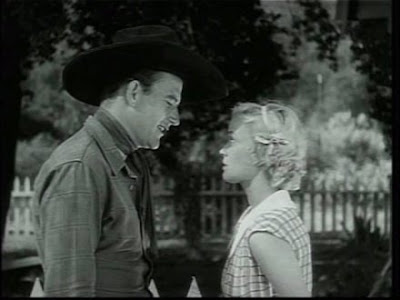 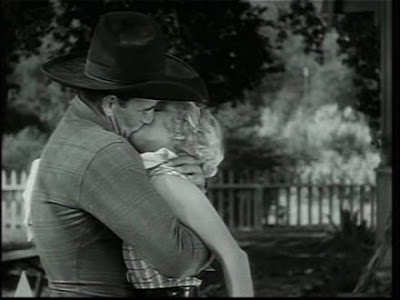 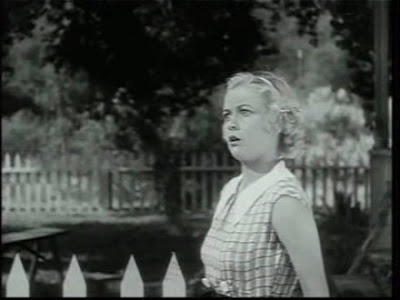 "Just wait until you try my muffins!"

This is a good old movie, if you don't expect too much out of it, and I don't know about you, but I really enjoy seeing people as famous as John Wayne when they were still new at the game. I also really like the idea of the gun fighter singing as he goes into battle. It's something that could be tried again. Bonus points for Gabby Hayes having such a prominent role and more than one closeup of him really enjoying a pipe. And with a modern sense of the ironic, this turns into quite an enjoyable movie that made me laugh out loud more than once. Just pay attention for lines that are now cliché and try to count how many times you hear DUMP DUMP DUMP DUMMMM!!!

UPDATE: El Capitan may have identified Elmer's gun: the Colt Alaskan. It could be that the hammer simply isn't visible in this old film. There were a couple of other shots that I didn't include because it was so hard to see the details, but when in the holster this gun did appear to have a bird's head grip, like the Alaskan.
Posted by AlanDP at 8:00 AM