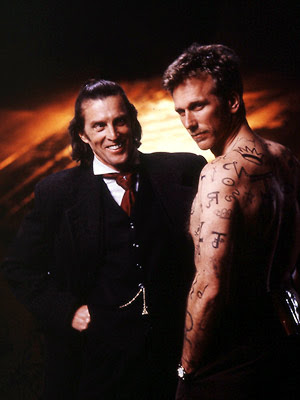 NOTE: My memory was faulty when I typed this up late last night, so I have corrected a couple of things. For whatever that's worth.
*****
If you have a cable/satellite package that includes the Chiller channel, tomorrow they're running a Brimstone marathon beginning at 8:00 AM central time. Only 13 episodes were made, which ran on Fox in 1998 back when they were trying to keep capitalizing on the weird phenomena/creepy stories phase that was created and led by The X-Files. I thought Brimstone was much better. Peter Horton plays a cop named Ezekiel Stone who should have gone to Heaven when he died, but didn't. His wife was raped, the rapist was caught but escaped punishment due to a legal technicality, so Stone hunted him down and killed him. A few months later Stone was killed in the line of duty, and because of how he had technically murdered the rapist, he went to Hell. He spent 15 years there, and then something happened and 113 demons escaped from Hell to roam free on the earth. So the devil (John Glover, who does a great job) made a bargain with him: Stone could go back to earth where he would hunt down each demon and send it back to Hell. If he succeeded, he would be given a second chance at living again, and perhaps not go to Hell the next time he died.

Since Stone is technically undead, many of the rules of human weaknesses don't apply to him. He doesn't have superhuman strength or anything like that, and he is still human in many ways, but there is only one way to kill him so he can take a lot of punishment without dying (although he still feels pain). There are lots of tiny details in the story that made it great, for example, every morning when he awoke he had the same exact amount of money in his pockets that he had when he died. Since he had died in 1983, he missed out on 15 years of earth stuff so many bits of news and "current events" references puzzle him until he figures them out.

The tattoos that cover his body are there for a reason: each one is the occult symbol of one of the demons who escaped. Every time he "kills" one, the tattoo burns itself off his body, so he gets to writhe in agony for a few seconds every time he sends another demon back to Hell.

Lori Petty also appears in several episodes as someone who befriends him and who starts figuring out there's something strange about him. Unfortunately, the series didn't last long enough to develop their relationship any further.

This show was way too smart for Fox, so naturally it was canceled well before its time. But if you have time to catch an episode or two, I recommend it. I already have my DVD recorder set for it. They'll be running 8 of the 13 episodes.
Posted by AlanDP at 11:54 PM