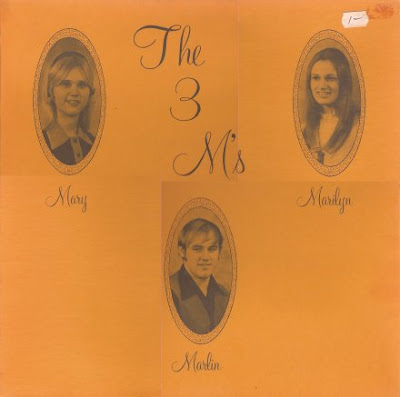 Another record that I bought second-hand, and I'm pretty sure I got it at Yesterday's Warehouse, which was my source for lots of obscure, oddball records back in the 80s.

The 3 M's were Marilyn Blume (vocals, guitar & piano), Marlin Weedler (vocals) and Mary Knudson (vocals). According to the jacket notes, they were all sophomores at a small college in Forest City, Iowa called Waldorf College. Some quick internet searching reveals that the college still exists, and is a small (about 600 students) undergrad-only college founded by and affiliated with the Lutheran Church.

They were not professionals. However, they were very talented and well-trained amateurs. Actually, it sounds to me like the two women were most likely trained singers, whereas Marlin was just a good singer who--possibly--didn't have formal training. I base this opinion only on how they sound to me. The women use very "operatic" pronunciation, while Marlin just sounds like a normal person singing. I'm sure the women's singing styles went over well in choir or in church, but they sound kind of odd singing folk music.

The 3 M's were heavily influenced by folk trios of the time, especially Peter, Paul & Mary. This record is a collection of popular folk songs interspersed with various Christian songs. Most of them are covers, but there are three originals written by Marilyn Blume.

Track list:
Side One
1. Moon Shadow (the Cat Stevens song)
2. Early in the Morning
3. Bamboo (this and #2 were Peter, Paul & Mary songs)
4. Wedding Prayer (possibly a cover, but I don't know where it originated)
5. Amazing Grace (the hymn)
6. Marvelous Joy (another Peter, Paul & Mary song, but I thought it was called "Marvelous Toy"--click to download a sample)
7. Lovely Jesu (another hymn)

Side Two
1. Follow Me (the John Denver song which was also covered by Peter, Paul & Mary)
2. Away in a Manger (the carol)
3. When I Am Down and Out (original written by Blume)
4. Benediction & Lord's Prayer (another original)
5. One Tin Soldier (the pop song and theme from Billy Jack originally recorded--I think--by the group Coven)
6. Joy in the Morning (another original by Blume)

It was recorded at a studio called Artronics, Inc., in St. Paul, Minnesota. I haven't been able to discover anything about this place--if it still exists, I don't know. The date of 1970 is my best guess. Jacket notes state that they were all sophomores who were going to graduate in spring of 1972, so I'm guessing it was recorded in '69 or '70. I think it's fairly safe to assume that this record saw a very limited release, probably being sold only locally. 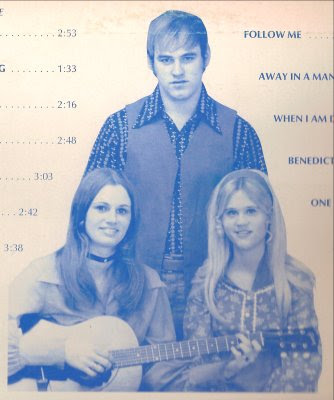 Ripping results: Not too bad, considering. A few minor pops that aren't distracting, and few worse pops that happened during periods of relatively low music volume so I was able to manually zoom in and excise them with surgical precision. The only bad part is on "Follow Me." Apparently the outside track of side 2 got dinged at some point, because there's a bad skip and couple of loud pops in this song that I couldn't do anything with. But other than that one track, it turned out pretty well.

Technical quibbles: the sound is too dark, it could have done with a little more treble; the guitar tends to overwhelm the vocals; the room they recorded in had too much echo. Still, it's an interesting album, a trio of good and honest singers, and a decent snapshot of that era. If anyone reads this who is willing to supply any more information about it or the members of The 3 M's, please leave a comment or email me.
Posted by AlanDP at 3:09 PM