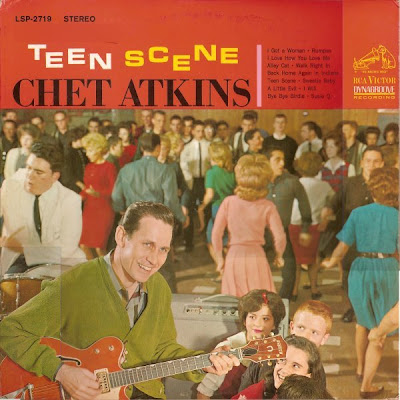 Somebody'll have to clue me in: was Chet Atkins really all the rage in 1963? Did they say "all the rage" back then? Or was that when they were saying "the most ut?" Or was that just a Jetsons joke?

Anyway, I can't tell you anything about him that you can't read on Wikipedia. I got some pretty good sound out of this record except for a jump on track 4. This album sounds more like a collection of sound samples, with most tracks running only 2 minutes or so and the whole album topping out at 26 minutes for 12 tracks. On some of the pieces, it sounds like the musicians are just getting into it and about to get a really good groove on when...it's over. That's my biggest gripe about it. But if you enjoy some good finger-pickin' guitar, this is a good record. Another more minor complaint I have about it is that none of the other musicians are credited. There's some good harmonica and tenor sax stuff going on, and a bass line is laid down by an actual baritone sax on a couple of tracks. I would have liked to have had a record of the names of those people.

I'm pretty sure this one is out of print.

I also found this blurb on the back of the jacket somewhat amusing (click to enlarge).

I won't be keeping all these old records I rip on my mp3 drive for future listening. For example, that Hullabaloo Show record I'll just copy to an archive CD just in case. But this one is well worth keeping.
Posted by AlanDP at 3:48 PM