The being called Ungol is dead, its resurrection is doubtful. But heed its teachings oh faithful, for on these memoratic disks contain, the wisdom of the ages, and by your iron fists, the horror, of false metal be extinguished.

As you now join the swelling ranks of the Legions of Chaos, together we will drive before us, the cringing herd of false metal, crush their spineless lackeys, and purge the world of their mutant plague!!!

(Too many commas, but they said "lackeys!" Hee hee!) 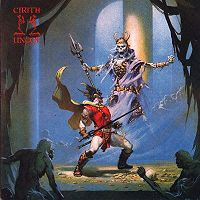 It was sometime in the mid-80s that I bought this one, and there were three reasons why. Actually, there were probably four. The fourth, and lesser, reason was because this was released on the Enigma label. Enigma was a smaller record label in the 80s that carried a lot of artists I liked, and I got the habit of keeping an eye out for the label as I was browsing the racks. Anytime I saw their logo I would pull that record out for a closer look. So that may have been another thing that convinced me to buy it. But the three main reasons were these:

1. The group's name is Cirith Ungol.
2. Awesome cover art by Michael Whelan that is suitable for framing.
3. Bach's "Toccata in Dm" among the track list on the back cover.

This was not the kind of music I usually listened to back then, or even now, although I must say that for some reason I like it more now than I did when I was younger. According to the info on their website, all the members of the group consider this to be their best album. I never bought any of the others, but then, I never saw any of the others anywhere, either.

What is it? Well, it's "doom metal." And it must still be quite a popular album, because it has a sales rank of around 45,000 on Amazon. My only real complaint about this stuff is the screamed vocals. I have always thought that any singer worth his salt should be able to somehow still sing, even if the musical form demands screaming doom. Everything else about it I like: the speed, the guitars, the energy, the atmosphere.

Try to run, try to hide.
If you don't, you'll surely die.
Screaming in terror, there you'll lie.
In Cirith Ungol, Tower of Fire.

Gorgons are shrieking their bestial cries,
Their piercing cry, burns you inside.
Screaming in anguish, there you'll lie,
In Cirith Ungol, Tower of Fire.

Demons circle the smoky skies,
Your fate hangs before you on a wheel of fire.
As you stand revealed to Satan's eye,
in Cirith Ungol, Tower of Fire.*

Yes. Yes, I think I can empathize with that.

The lyrics are influenced by various works of fantasy literature: Tolkien (obviously), also the Eternal Champion works of Michael Moorcock. I like it. So if anyone were ever to ask me, "Say Alan, can you recommend a good doom metal album?" I would say without hesitation, "Yes: King of the Dead by Cirith Ungol."

Ripping results: No skips, no pops. As perfect as a vinyl rip can get.


By the way, if anyone were ever to put together a bootleg mix CD of nothing but metal bands doing their own versions of baroque and classical pieces, I would be willing to pay for it. Just so you know.

*Cirth Ungol was "the pass of the spider," not the "tower of fire." Someday we will drive before us, the slouching herd of the false Tolkien fans, crush their spineless lackeys, and purge the world of their ignorant posing.
Posted by AlanDP at 2:50 PM