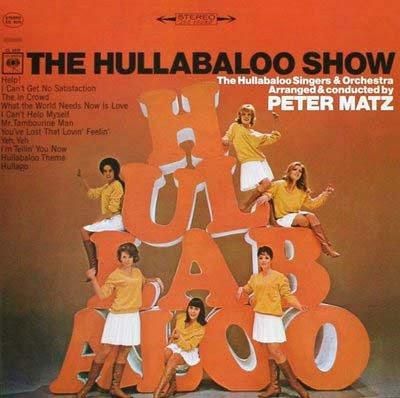 "You gotta try this stuff, man!" he says. "It'll, like, blow your mind!!!" Meanwhile his disturbingly coherent dog is cleaning out your cabinets. "Mmmm....reanut rutter!" you think he says.

So that night you take the little tablet, washing it down with a glass of orange juice, and sit down to watch the television until it hits. And then...

You feel strangely...normal. But you are hearing the most unbelievably bizarre thing you have ever heard come out of that television set. In an hour it's all over, and you get up to get yourself a snack.

But only a half second later the ultimate horror of it all hits you, and you sag helplessly against the wall, gibbering mindlessly at this mind-altering realization: what you just saw and heard on the television was not a hallucination. It was a real television show.

Across the country, everyone who can bend a leg and shake a hip is doing the frug, the swim, the monkey or any of the dozen other varieties of exciting new-beat dances. And when the movers and shakers aren't dancing up a storm at the nation's discotheques, it's a cinch that they're listening to the bouncing sounds and rocking rhythms of television's weekly "Hullabaloo" show. In this dance-along, listen-along album, you'll hear the show's own Hullabaloo Singers and Orchestra perform a wild and wonderful collection of current hits that are featured on the sensational program.

One of the chief reasons for the "Hullabaloo" show's tremendous success is Peter Matz, who leads the Orchestra and Singers both on the television show and in this album. Conductor-arranger for many of Barbra Streisand's enormously popular Columbia albums and Emmy award-winner for similar duties on the "My Name is Barbra" television special, Matz has fast become one of the most sought-after musical talents in show business.

Keeping the rhythmic feel of the "Hullabaloo" show, Peter leads the Singers and Orchestra in some of today's biggest hits, in versions he created especially for this album. Hullabaloo Theme is included, of course, as well as top tunes like I Can't Get No Satisfaction, The In Crowd and Bob Dylan's Mr. Tambourine Man, made popular by The Rolling Stones, The Ramsey Lewis Trio and The Byrds, respectively, in addition to Peter's theme for the show, Hullago.

So come on--frug, swim and monkey to your heart and soul's content. Or just listen and dig what the whole kicky scene's about!

Fortunately I was born just a little too late to be cognizant of this show when it was on, and it's a pretty sure bet that my parents wouldn't have watched it anyway. I think. They did watch Laugh-In, after all. I...I don't know what to say about this album. A pathetic attempt to make rock & roll palatable to the same people who thought Lawrence Welk was hip? An uncannily prescient demonstration of irony? Or was it all for fun? Or was it all for...something else?

I have included a lo-fi sound sample below so that you may hear for yourself. But be warned, this is only a taste of the full album. I have intentionally shielded you from the sanity-blasting horror of the complete work, and from the ultimate, mind-shattering insanity of...You've Lost That Lovin' Feelin'.

Now excuse me while I gibber mindlessly.

P.S. This is the first time I have ever typed the word "discotheques," and G-d help me, I hope I never have to do it again.
Posted by AlanDP at 8:12 PM