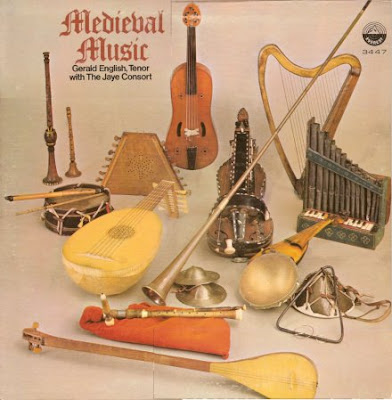 The Jaye Consort - Medieval Music (1978)
If anyone has been looking at the Twitter feed for the past day or so, you may have noticed a few oddballs popping up. This is one of my favorite oddballs from my collection, and I wish I had more like it. I love the sound of this ancient music.

I went to college for two years (from 1982-84, and then gave up) at Abilene Christian University in Abilene, Texas. I've mentioned Abilene and ACU before but I don't think I ever stated clearly what ACU stood for. The ACU bookstore was an interesting place. It was mostly a typical college bookstore that carried all the books required by the various teachers, but it also had a few odds & ends like foods that are popular for college students (ramen noodles, canned soups and so forth), and a small record section. The record section, though small, was an oddly eclectic mix of the popular and the obscure. I don't know if perhaps this record was required for some music course that I wasn't aware of, or if it just turned up there by fortune, but I saw it one day and bought it.

The music on this record was played by The Jaye Consort on instruments constructed as they were hundreds of years ago. Liner notes:

The Jaye Consort have here abandoned their viols (made by Henry Jaye, c. 1620) to play medieval music on reconstructed medieval instruments–all of which are depicted on the cover. The result is a heterophony, not unlike an Arabian night-club band, but nothing has been added to the music apart from drones, divisions, and a variety of percussion.

A legend on the back of the cover shows what all the instruments pictured on front are. There are specific notes for each piece detailing its approximate date of composition, its origin if known, and which instruments are used in its performance. There are 25 tracks, most of the pieces being quite short to modern ears. The vocal parts are sung by Gerald English, as noted on the front cover.

I haven't been able to find much of anything on the internet about this album specifically, although there are a few hits for the Jaye Consort.

I've included one piece in full below as a sample track, and although there are many great pieces on this record, I chose this one because according to the notes, "it may be the earliest known example of keyboard music." It was written for and played on the small portable organ like the one shown at right center on the cover graphic above. And from the notes, "it was taken from the Robertsbridge manuscript of c. 1325." The estampie (click for Wikipedia link) is a form of medieval dance music, and there are several of them on this record. The Lamento di Tristano and the Maya Kalenda mentioned in the Wikipedia article are also both included on this record.

Give it a listen and see how it sounds for a 700-year-old piece of keyboard music.

UPDATE: I have begun posting some pieces from this album on YouTube. You can listen to them by going to my YouTube channel and looking through the list.
Posted by AlanDP at 6:19 PM