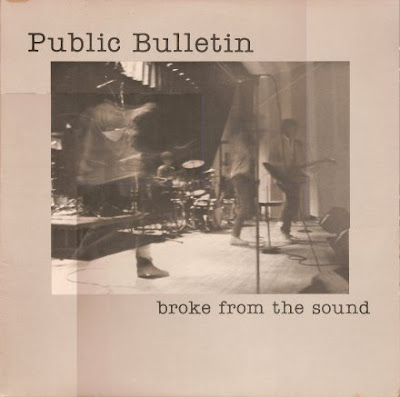 This is an interesting one. Public Bulletin were a local area band formed in the mid-80s by a group of friends who all went to San Marcos High School in San Marcos, Texas. This was about the time I was spending a lot of time in that city, working, going to college and for a short time living there. I bought this record at Sundance Records in San Marcos. The SWTSU newspaper had a piece on them back then that I still remember a little of. If I recall correctly, they had all gone to an Elton John concert together, and upon leaving, they decided that they could form their own rock band. None of them had any previous experience with music, and whoever could scrape the money together first got to buy whatever instrument he wanted to play, as long as someone else hadn't already taken it. That's about all I remember of the article.

The album was recorded in Austin and I think they may have cut one other record, but I'm not sure. I have always enjoyed listening to it. The music reminds me of the Smithereens and R.E.M., although in my opinion Glenn Gary, the lead singer, had a much more pleasant voice than Michael Stipe. Here's a photo from the back cover that shows the whole band and their instrumentation (click to enlarge). 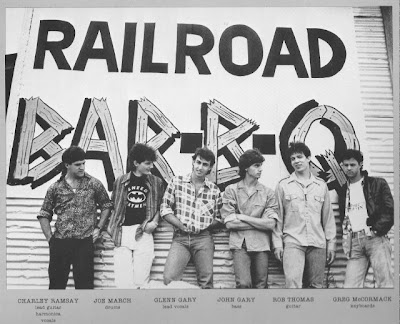 Most of these guys later formed the core of another group called Hey Zeus, and I think they were all active in music for several years in the mid-80s to early 90s. I don't know what has become of every one of them, but in trying to find information about them I did learn that Rob Thomas (second from right) is now better known as a writer for television and the creator of two TV series': Cupid and Veronica Mars. He has a website at Slaverats.com where you can listen to a great many songs recorded by the various bands of which he was a member, including Public Bulletin.

Ripping results: Perfect, after I manually smoothed out a couple of pops. If you can find it, buy it.
Posted by AlanDP at 3:03 PM