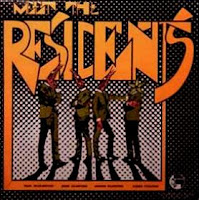 I don't feel that I'm really very qualified to comment on avante-garde music, because I'm not that big of a fan. I dabble in it, a little, just as a curiosity, but much of it is rather hard on the ears (my ears, anyway).

The liner notes say, in part, "Let the strangeness wear off through a couple of plays." Well, I've listened to this one many times and the strangeness hasn't worn off yet.

I had the curious experience recently of trying to backtrack through my memories and recall how I first learned of The Residents. I felt like I was wandering through a hedge maze: now and then I could see another avenue through a gap in the growth, but the ultimate goal was still unknown. But finally, I think I remembered.

Back in the 80s and early 90s I used to get periodical catalogs from (primarily) booksellers Loompanics and Amok. It may have been in one of those catalogs, or maybe in something I bought from one of them, that I first read about The Residents. Or, it may have been something in The Book of the SubGenius or High Weirdness By Mail. I think High Weirdness is the most likely, because it might have listed Ralph Records. Anyway, my curiosity eventually convinced me to buy this album, which I had to order directly from Ralph Records. Music stores around here just don't even know who The Residents are.

ABOUT THIS PRESSING...
MEET THE RESIDENTS was originally released in 1974, on the Ralph Records label. The tapes were monaural recordings on home equipment and suffered further fidelity loss in the mastering and pressing states. In 1976, The Cryptic Corporation came into legal possession of the The Residents recordings, and began working on how to restore these original tapes to studio quality. Using the master tape as a directive, the album was disassembled, reprocessed, and reconstructed into this true stereophonic version. No re-recording was employed. The artists who appear on this recording have personally approved this as an authorized realization of the original LP. 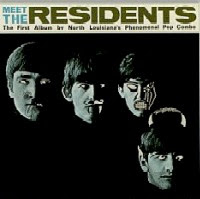 The cover above was not the original cover, it is the version I have, which was made for the 1979 re-release of the album. The original cover is to the left. The cover art and the faux names of the band members is as far as the parody goes, however, the music is nothing in the nature of parody, but is all original.

I'm sure there are many things that set The Residents apart from most groups, but one big thing is that the individuals have intentionally sought anonymity. There is a lot of speculation as to who they are, and I have read a couple of good theories about their lead singer at least. [My own pet theory is that "they" are not a group at all, but a single individual.] But to the general public at large, their identities still remain unknown, although they have been active for 40 years and this, their first record, was originally released in 1974.

If you've read this far and haven't gotten bored, take a minute to read the liner notes below. Click to enlarge. 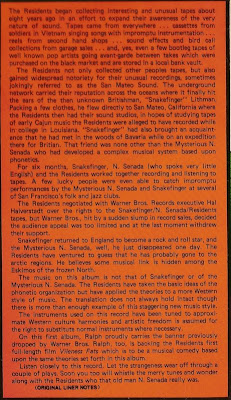 So, how much of this is true and how much is fabricated? Only The Residents know for sure.

I have a few other things of theirs, a mixture of records and CDs. I'll get around to all of them later, I suppose.

If you look this album up on Amazon, or click through the link at the end of this post, they have song samples that you can listen to.

The first six tracks of side one are throughly enmeshed into each other, breaking them into individual tracks would have been impossible, and I don't think they were ever meant to be heard apart from each other anyway. So my final version of them resulted in 7 mp3s instead of the total 12.

Ripping results: One faint pop on N-ER-GEE that I wasn't able to dig out, which may not even be noticeable to the casual listener, although I don't know if it's possible to "casually" listen to The Residents.

As time went by their music became more accessible, more "pop" oriented, and they even have a few songs that I could envision being played on some small college station late at night. I could see myself buying more of their stuff, just for the adventure it would be to listen to it. I would especially like to get their compilations Heaven? and Hell!

If you are not into the avante-garde/experimental side of pop or rock, I wouldn't recommend this one for you. I think the compilations I mentioned (which I have heard some of) would be a better starting point. The music on this record is a combination of singing, speaking, chanting, instrumental playing and found sound that is at times hypnotic, sometimes scary, and sometimes yes, there is a melody that you can whistle. I have to admit that I still don't completely get it, but I'm closer now than I once was.

It looks like this record is now out of print, you can't even get it new from Amazon but maybe you can find a used one if you really want to, and you might get lucky and get one from Ralph Records if they can find some, but don't count on it. I hadn't realized it was so hard to find these days. I guess it's a good thing I got it when I did.