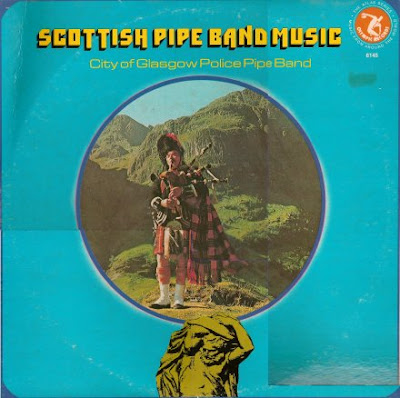 Here at last is a pipe band album featurning a wide selections of Scots tunes known to everyone the world over, interspersed with piping "evergreens" and played by one of the world' leading combinations, THE CITY OF GLASGOW POLICE PIPE BAND. This is a record designed not only to please the world's thousands of pipe band enthusiasts, but also to appeal to the legions of laymen who know little of the finer points of this music but who love to hear a good pipe band playing good tunes which are familiar to everybody–Scots or otherwise.

I have heard there are people who don't like bagpipe music. You may be one of them. If so, stop reading right now.

This is another record that I bought second-hand and found one day at Yesterday's Warehouse. If you are wondering why I would pay for a used record of bagpipe music then you must be one of those people who should have stopped reading two paragraphs ago.

The album is comprised mostly of traditional pieces, but with some originals that were written by band members. Every track but one are medleys of two, three or four pieces, which will explain the complicated-looking track list.

Side Two
1. 2/4 Marches
Highland Laddie
Corriechoillie
Teribus
2. Scottish Airs
Bonnie Galloway
The Rowan Tree
3. 6/8 Marches
Kenmure's Up and Awa'
March of the Cameron Men
The Campbell's are Coming
4. Strathspeys & Reels
Because He was a Bonnie Lad
Louden's Bonnie Woods and Braes
Tail Toddle
Fairy Dance
5. Slow March, Retreat Air & Quickstep
The Road to the Isles
When the Battle is O'er
The Earl of Mansfield
6. Drum Fanfare (agh! a drum solo!)
7. Pibroch Variation 1
Hail to My Country
8. Scottish Air & Quickstep
We're No Awa' Tae Bide Awa'
Happy We've Been a' Thegither

Ripping results: This is one of those "not bad, considering" albums. Nothing too bad except for a skip on side one, track two. Other than that, turn up the volume, put on your kilt, stick a knife in your sock and dream about the old country.

I had assumed this one was out of print, but boy was I wrong. You can get it on CD from Amazon, although it now has a different cover. Isn't that amazing.

P.S. My own extraction is mostly German and Scottish. On the Scottish side I am a member of Clan Gilley, which is a cousin clan of Clan MacPherson.
Posted by AlanDP at 3:09 PM