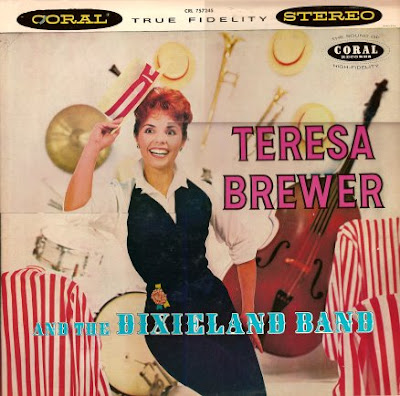 When I started digging into the big vinyl collection I was hoping, and partly expecting, to find the odd hidden gem. And by that I mean a record that I would enjoy hearing and hearing again, but also a record that would be in very good condition for being so old and having come to me second- or third-hand. This is an "inherited" record that turned out to be one of those hidden gems.

Teresa Brewer, the girl with that special sparkle, has become a household familiarity to young and old by singing songs both old and new, with an approach that is always fresh and delightful.

She is as American as apple pie, and so is Dixie.

The combination of Brewer and a Dixieland setting might at first seem ill-advised, considering how she has been presented on records in the past. However, in the listening, the bounce of Teresa and the beat of Dixieland is indeed a joyful one.

The tunes: Dixie evergreens; the musicians, conversant with this kind of music. Yank Lawson, in particular, something of a giant of Dixie trumpet. The final component: Teresa Brewer, very much at home with all that Dixieland, and as always, fun to hear.

I still think that pose on the cover makes her look slightly maniacal, but I was surprised at how much I liked the music. I think I should say that I was already a fan of Dixieland jazz, but I had never heard much vocal work in that genre, and I had never heard of Brewer before.

Wikipedia says that she "was one of the most popular female singers of the 1950s." Before my time. She passed away in 2007 and appears to still have an enormous fan base, based on my cursory searchings around the internet.

I read that she never learned to read music, and learned all her parts by ear. Still, her voice is as agile and precise as a professional gymnast (if you forgive the metaphor), and she sounds like she is about to break into laughter at any second.

Track list:
Side One
1. The Dixieland Band (click to download a sample)
2. Georgia on My Mind
3. Everybody Loves My Baby
4. Basin Street Blues
5. When My Sugar Walks Down the Street
6. Alabama Jubilee

Side Two
1. Bill Bailey, Won't You Please Come Home
2. When It's Sleepy Time Down South
3. Is it True What they Say About Dixie
4. Weary Blues
5. Mississippi Mud
6. When the Saints Go Marching In

Like many older albums, this one isn't dated, but Answers.com says this one was released in 1959. Her vocal style may not be for everyone. I think a good word for it would be ebullient.

Ripping results: Completely perfect. Not a pop, not a skip. And this is a 50-year-old record! It's truly amazing.

I had to p-shop the cover art to remove some permanent marker that my late mother-in-law wrote on it with. According to her notes, this one had been taped. I never would have thought that mom-in-law liked Dixieland. By the way, this isn't the only one--I plan on writing about another Dixieland record in a few days that is really remarkable. I have only started going through her old albums, and I have already learned that she and I had a lot more in common than I ever thought. If I had known she owned records like this, it might have given us something to talk about on the uncommon occasions that we were together.
Posted by AlanDP at 3:35 PM