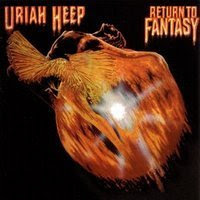 Are there any Uriah Heep fans left? Critics hated this band. I have four (I think that's all) Heep albums that I used to listen to all the time, and this was one of them. I hadn't heard it for many years until I ripped it the other day. I was somewhat worried about that. What if I had changed so much that what I remembered as a favorite album no longer seemed so great? Would it tarnish my memories of how much I had enjoyed this album? Would the music finally seem--the ultimate curse!--ironic?

I need not have worried. I still think this is a great forgotten album (like much of their stuff was), and I found myself once again singing along with songs that I hadn't heard in more than a decade.

I first became acquainted with this group via my first-year college room-mate, who had a battered old LP of The Magician's Birthday. I played that album over and over. Later on when I was back home again, I bought the LP for myself, but unfortunately it had only a regular jacket instead of the original gatefold jacket with lyrics and extra graphics. Still, the music was the same.

Being one of the great overlooked rock bands of all time, most of their stuff was hard to find in record stores, except for the nearly ubiquitous Demons & Wizards and The Magician's Birthday. I always kept an eye open for their stuff, though, and one day I ran across Return to Fantasy. It doesn't have the epic scope of Demons or Birthday, but in my opinion it's still a solid album with plenty of good music.

Special favorites: "Your Turn to Remember," "Why Did You Go?" and "A Year or a Day."

As I was looking it up at Amazon just now I learned that someone actually put together a tribute album to Uriah Heep (Return to Fantasy: A Tribute to Uriah Heep