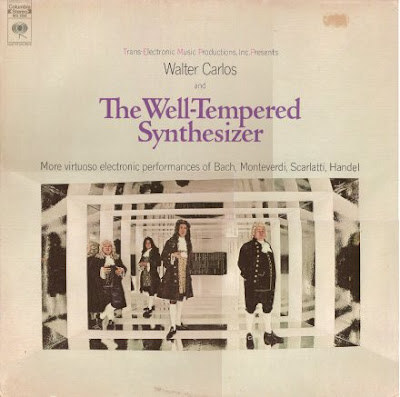 First, let me say that I am ashamed that this is the only Wendy Carlos album I have in my collection. But, during my record-buying heyday I didn't have the resources of the internet at my disposal, nor did I have anyone to mentor me and tell me about artists I might be interested in. I had to find my way as I went along, and sometimes I strayed in the wrong direction. Also, one can't buy everything. 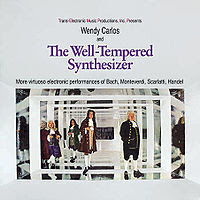 Above is the cover of the album I have, which is the original and was purchased second-hand. To the right is a thumbnail of the modern cover. Yes, there is one notable difference, but this post is about her music and not her life choices, which some may find objectionable but as far as I'm concerned are irrelevant to the topic at hand.

Wendy Carlos was far ahead of everyone else in all of these fields, and I don't think anyone else on the planet has ever been more expert than she was (is) at wringing such a wide variety of timbres from the Moog synthesizer.

Here's an excerpt from the beginning of the liner notes:

Something went wrong. "Switched-On Bach" was meant to be an artistic experiment, a learning and testing vehicle, an example of a contemporary composer trying to find himself--not the marked commercial success it has so clearly become. And one year later, here we were, faced with deciding the content of a follow-up album. Walter wanted to attempt an orchestration of an ambitious 19th-century work, but insufficient multitrack facilities prevented that. And doing one of Walter's own works seemed untimely and best left for another year. Finally, the public's enthusiasm for more electronic Bach supplied the answer, and the result is this new switched-on baroque album.

Something went wrong. Several critics and a lot of interested musicians and music lovers started to ask "How does the Moog do it all?"--implying that the machine was somehow responsible for the artistry and creativity to which our "Switched-On" audience has responded.

And so the myth was perpetuated that led to the unique situation in which we now find ourselves where, in effect, a Steinway piano can receive curtain calls for a performance by the eminent Mr. Horowitz (or, yes, even Mr. Gould).

But at this point in time, the synthesizer is really nothing more than an embryo. And, just as the pioneers of electronic music established the groundwork with what they had available, Walter has carried on, within the limitations of the current device (and there are frustratingly many), the task of bringing the medium (electronic music) out of associations with but one style (contemporary, aleatoric, serial, etc.) in the music mainstream. Walter is uniquely qualified for such a task, for in him are combined the hybrid talents of composer, performer, conductor, instrument designer and builder, piano tuner, acoustician, recording engineer--and tireless worker.

This was written in 1969, when electronic music was still new, strange, and perhaps mistaken as faddish. It was exciting and different, but would it last? The Moog, the first portable synthesizer that was affordable by individuals rather than major studios and corporations, had begun to make serious inroads into music, but it seemed so limited. After all, it was monophonic, for one thing. And this is monophonic not as opposed to stereophonic, but monophonic as opposed to polyphonic. It had a keyboard, but it played only one note at a time! Those who derided it for this "limitation" apparently chose to selectively forget that many instruments are monophonic: take the sax or the trumpet, for examples. Some derided the synthesizer as "not real music" because the sounds were produced electronically rather than acoustically, but this is a typical reaction to all things new, in the same way that some acoustic guitarists derided the first electric guitars, and I'm sure somewhere back in the dim mists of time someone did the same thing the first time someone put two bows of different sizes next to each other so he could pluck out a rhythmic perfect fourth.

For the sake of completeness, I have included a fairly high-res scan of the complete liner notes. Click to enlarge and you may be able to read it all. 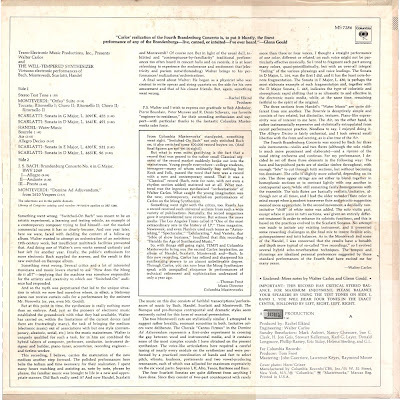 Throughout the 70s and into the 80s, most people knew the Moog only as "that fat sawtooth lead they use in all those rock songs." But Wendy Carlos had already proven that the Moog was capable of so much more than that.

No attempt was made to imitate any existing instrument, and it presented some rewarding challenges in the final mix to insure flexible solo, accompaniment and tutti balances. As in the Monteverdi and some of the Handel, I was concerned that the results have a breadth and depth more typical of so-called "live recordings," so I evolved several hybrid echo-reverberation techniques.

Carlos was working well beyond the cutting edge in this and her previous album, and in my opinion other more popular musicians who came along later would have done well to pay much closer attention to the work she had done.

Ripping results: Perfect, which is almost unbelievable, since this record had to knock around in someone else's collection for at least 20 years before I bought it.

If you are a fan of electronic music, this album or her previous one, Switched-On Bach, should be in your collection (probably both). I can easily see myself buying anything she has released.
Posted by AlanDP at 6:30 PM