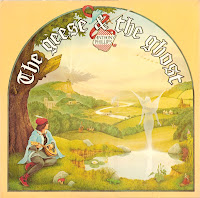 I don't remember buying this record, but I must have. And I definitely purchased it used. So I don't know why I bought it. I can't imagine it was because I saw Phil Collins in the vocal credits, because he has never thrilled me much. It couldn't have been any of the other names in the credits, because I wasn't familiar enough with Genesis back then for them to mean anything to me. Maybe it was the cover, which is pretty cool. Click the image to the right to view a much higher-res version where you can pick out some neat details.

Well, The Geese & The Ghost was a project of Anthony Phillips, who was one of the original members of Genesis. When I went to rip this album recently, his name did ring a bell, because I have a sampler CD of various ambient artists on the Audion label which includes two pieces by him. But up until I did some reading to learn more about this record, I didn't know he had been in Genesis. I know so few details about that group that I fear I may be listening to this record out of context. I have always wanted to go back and get everything up to the point at which Peter Gabriel left the group, but after that I'm really just not interested. It's obvious to me that they were a serious art-rock or prog-rock group in the early days, and Phil Collins pretty much turned them into just another pop group.

So anyway, on this album Phillips is backed up by Mike Rutherford (of Genesis and Mike & the Mechanics) on guitars and various percussion, and by Phil Collins providing vocals on two of the tracks that aren't instrumentals. Plus about a dozen other musicians who I've never heard of otherwise. Phillips himself plays guitars and a wide selection of other stringed instruments, plus synthesizers, organ, mellotron and several other keyboard instruments. He also sings on the one other track that is not an instrumental.

This album is prog-rock. So far progged, in fact, that there is very little rock left. Taken as a whole, the album starts out very soft and slow, picks up in the middle, and then tapers down again toward the end. Don't get me wrong, I enjoy (most of) it, but most people probably won't. Those vocal tracks by Phil Collins just about put me to sleep. 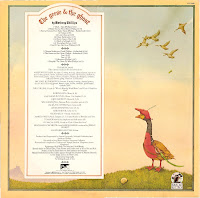 So I guess the question that should be asked is: is it worth shelling out $15 for a used copy of the digitally remastered CD because that's the only version available now except for even more expensive collectible versions? If you're a hard-core Genesis fan, the answer is yes. But if you're a hard-core Genesis fan, you probably already have it. If you're not, nah, I wouldn't think you'd be very interested.

Click the image to the left to view a much higher-res version of the back cover. The goose wearing armor looks pretty cool, but check out the flying geese also. Again, some interesting details there. The cover art was done by illustrator Peter Cross.

Ripping results: good. This record had some surface damage which caused a few bad clicks that I couldn't entirely remove without destroying the surrounding music. But will I go out and buy the CD so I have a perfect copy? No. This is good enough.

My favorite track is "Henry; Portraits from Tudor Times," which has some nice keyboard work, and I think has more energy than the rest of the record.