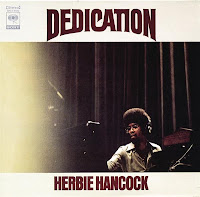 It has been a jazzy day here today, having downloaded this album and ripped a Chick Corea record. Also, we got a lot of rain. I haven't had a rain gauge since the house move, but my dad who lives less than 5 miles away from us reported 5 inches of rain at his house.

Anywho, this past week KRTU featured Herbie Hancock for the daily lunch feature (runs 11:00 AM to 1:00 PM local time weekdays). I caught the tail end of one piece that I really liked the sound of, and listened long enough to catch the info on what the piece was named and which album it came from.

In my quest to go further into jazz, I am just beginning to get into Herbie Hancock, although I must say that I've already heard a lot of his stuff played on KRTU, so I know what I'm getting into for the most part. And this is a good one.

Dedication was the next release after the famous Head Hunters album, when Hancock was still heavily into electronics and the more "fusion" edge of jazz. The KRTU announcer (Aaron Prado–I hope I spelled that right) said that this album was not currently in print, but if you poke around on the internet you might find a used or collectible copy somewhere. This piece I heard, called "Cantaloupe Island" was enough to motivate me to do a little poking, and I found that Amazon has an mp3 version that can be downloaded for 99¢ a track, and at four tracks, that's a bargain. Those four tracks give you a total playing time of 40 minutes.

Unlike Head Hunters, this is not a Herbie Hancock "leader record," that is, a record for which he composed the music and led a group of musicians which he recruited himself. Dedication is a solo project, with Hancock performing all instruments.

When I wrote about Wendy Carlos I had noted how some disparaged the synthesizer as not creating "real music." Hancock ran into that same prejudice when he started getting into electronics. But there is a true art to creating sounds electronically, and a further art in knowing how and where to apply those sounds. Hancock has it, and this is the real thing.

An aside: I remember reading an interview with Miles Davis about the time that Tutu came out and he said that he liked electric keyboards because "you press a key and that note plays as long as you pay the electric bill." Heh.

This is only the second album of Hancock's to become a part of my collection, but I expect there to be many more in the future. So if you are unfamiliar with his work, I suppose the best place to start would be with Head Hunters (which is next on my hit list), but starting with Dedication wouldn't be a bad idea, either.