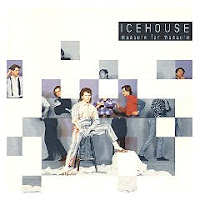 Another one from the halcyon synth-pop years of the 80s. I bought this one new, but I don't remember exactly why. I think the biggest single from this one, "No Promises," was getting some radio play around here, and I probably saw the video on MTV. Still, my real motivation for buying it is now a mystery to me.

Icehouse apparently has a devoted following, and this album is in a tie for their best album ever (from what I've read). It's mostly quite atmospheric, and heavily electronic, relying greatly on the Fairlight electronic music system which was totally-cutting-edge-technology back then. There are a couple of goofy tracks that just reek of the 80s, but other than that it's a pretty solid album and a very good example of what 80s synth-rock could attain when it wasn't getting screwed up by a bunch of Brits with bad hair.

One item of note is that Brian Eno is credited as a member of the group. If you've never heard of him, then click the link and at least read the Wikipedia entry, because he has been enormously influential in a variety of musical genres as both a musician and a producer. He is also considered to be the originator of "ambient" music. The year after this album was released, he was the producer for another album which became hugely famous and which you've probably heard of.

Another item of note is that this album was recorded digitally, which was still uncommon in 1986. The Wikipedia entry says that it was only the third album to be recorded digitally, which doesn't sound right to me. Numerous internet sources state that the first album to be so recorded was Ry Cooder's Bop Till You Drop in 1979. If I recall the liner notes on the Scorpions' Love at First Sting correctly, it was also recorded digitally (someone feel free to correct me on this if I'm wrong, I can't find my CD at the moment). That was in 1984. Peter Gabriel's Security was also recorded digitally, and released in 1982. I find it hard to believe that only three albums had been thus recorded by 1986. But like I said, this was still fairly uncommon in 1986, so you can add that to your meaningless musical trivia file.

Should you buy it? If you're still into 80s synth-rock and you somehow missed this one, then yes, by all means buy it. Otherwise... I would probably not be averse to getting their follow-up to this one, called Man of Colours.

The album cover pictured above is the alternate cover, and I'm not sure why there were different covers. Perhaps this one was made for the U.S. market, with the original cover (below) marketed in Australia and Europe. But I'm not sure.