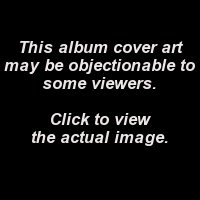 As long as I'm on this Ralph Records kick, here is another one from The Residents. This one has the distinction of being the only Residents music I ever bought from (or ever saw in) a local music store (the Hastings in Seguin). I don't know how it got there. It was the only one, and after I bought it, it was never restocked. This one was not released by Ralph, however. It was released by Rykodisc.

"Double Shot" (the title includes quotation marks) is a mini-CD, that is, a CD-3, or three-inch diameter CD including three tracks:
1. Double Shot
2. Loss of Loved One
3. Kiss of Flesh (instrumental)

A lot of time and a lot of albums that I missed came and went between this one and Duck Stab, and the music on this one is very different. The vocalist no longer disguises his voice with recording or electronic tricks, and on these you can clearly hear what seems to be his real voice and his very pronounced southern twang. Instrumentation is not listed, but it sounds like mostly electronic instruments. I would call it electronic soundscapes with partly spoken and partly sung vocals.

Track one, "Double Shot" is a cover of an old 60s tune by that title, although I think it may be more accurate to say it's an "interpretation" rather than a "cover." Most covers by The Residents are that way.

"Loss of Loved One" is an extended version of the piece that appears on the album God in Three Persons. "Kiss of Flesh" is a slightly shorter instrumental version of a piece with vocals that is also on that album, and is another of those soundscapes with a heavy drum (probably drum machine, if my ears don't deceive me) background that has two different things going on: the original music, dark and ominous, with the gospel hymn "Holy, Holy, Holy" layered on top of it, creating that characteristic Residents tension of trying to listen to two different musical atmospheres simultaneously. They come together in a final resolution which is both sweet and foreboding at the same time.

"Double Shot" (the song) is supposed to be the core inspiration for God in Three Persons, which boasts similar though not identical cover art. Both this mini-disc and the Three Persons album have lyrics which are NSFW. Some of the lyrics are the kind that if someone heard you listening to it as you walked down the street, and they took the trouble to listen and understand them, they would tend to step away from you and pull their children closer. Very dark and eerie, even twisted, I might say. The conversational tone of the vocalist makes it even more disturbing.