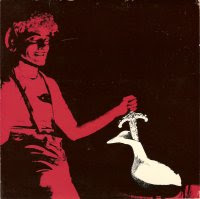 Writing about Meet The Residents the other day made me want to dig out this one that I hadn't listened to in many years. The good news is, this one is available from Amazon, and the new edition has twice as many tracks as the original. Available either as a CD or as mp3 downloads. I think I may have to download just those extra tracks that I don't have. It would be worth it.

Duck Stab in its original version such as the one I have is a 7-inch, 33 1/3 rpm, small-hole-in-the-middle EP with a total playing time of about 15 minutes. Released three years after Meet The Residents, this collection of songs are now showing a slightly more coherent pop format: discrete tracks of clearly identifiable songs, although I don't think I can yet hear the lead singer's real voice. All the vocals are altered with various recording tricks that slow down, speed up, or otherwise distort his real voice.

Side Two
1. The Booker Tease (instrumental)
2. Sinister Exaggerator
3. Bach is Dead
4. Elvis and His Boss 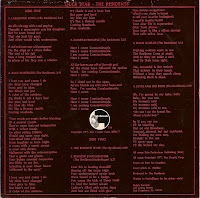 A few comments on specific songs. "Laughing Song" is written in limericks. "Blue Rosebuds" is the slowest and second-longest song on the record and is just flat-out creepy. "Constantinople" is one of the most insidious earworms I have ever heard. "Bach is Dead" has a very catchy rhythm once the "singing" starts and as for "Elvis and His Boss," well, it shows that The Residents have long had a fascination with Elvis that years later came to a spectacular climax with the album The King and Eye. If you click through the Amazon link at the bottom you can listen to song samples for the whole new extended version of this album.

One other note, that I almost forgot. In a couple of these songs, like "Constantinople" and "Bach is Dead," it seems to me that there are at least two different things going on. It sounds to me as if two different chord structures were layered together. Taken alone, either one would sound sweet and fairly "normal," but together they create extreme tension (some might say "discord" but I don't like to use that word because "discord" is mostly subjective based on what the listener is accustomed to hearing). It makes for a very dramatic effect.

This is another one that ordered direct from Ralph Records sometime in the mid-80s.

Ripping results: perfect, but it wasn't easy. I had to thoroughly clean side 2 several times to get rid of two bad skips, and I manually removed some pops after recording the wav files. But my finished mp3s are flawless.

Some people consider this their best album. It combines the total weirdness of Meet The Residents with songs that are just barely normal enough that you can sing along with them, more or less.