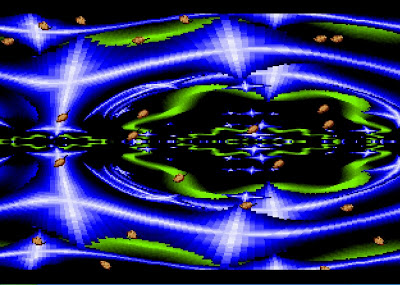 It was probably 1995 (the first year that I had "unlimited" internet access via Netcom), and certainly no later than 1996 that I downloaded this cool demo that was called "Timeless," which was created in 1994 by a programmer who went by the name Tran. I don't remember where I downloaded it from, but I never forgot it. It was used as a screen-saver by some, although it wasn't because it had to be started manually. Also, it was likely you would have to tweak the DMA and IRQ settings of your soundcard to get it to work right.

My last native DOS machine bit the big one years ago, but I never forgot "Timeless." It ran in a continual loop with some very dense ambient music and I could sit and watch it for...well, a long time. It was trance-inducing and hypnotic. Yesterday some ambient piece popped up on my mp3 player that reminded me of the music from "Timeless." So I thought I'd see if I could find anything about it. Back when I used to run it on the old 486...

By the way, that old 486 did not come with a modem or a sound card--who needed them, right? I first installed a 2400 baud modem that I bought for $5 at a ham radio swap meet, then later I bought a package from somewhere, probably Circuit City, that had a soundcard plus a 14400 baud modem together. I remember asking the CC guy how hard it would be to install, he asked me if I had ever done any other upgrades. "Well, I installed a hand scanner not long ago," I answered. "If you can get a hand scanner to work," he said, "this'll be a piece of cake." What a headache that scanner was. I had to create a special boot floppy because there was an IRQ conflict that would not allow the scanner and the soundcard to work at the same time. So if I wanted to use the scanner, I booted from the floppy, did some scanning, then rebooted so I'd have sound again. And then I had another special boot floppy so I could play Aces of the Pacific. Aces didn't work too well anyway because the computer was too slow (neither did Doom), but things picked up nicely when I finally got my first Pentium. But I digress.

Back when I used to run it on the old 486, I thought it was one of the coolest things I'd ever seen, and I also loved the music. When I went hunting for it yesterday I found that it has since been ported to Windows, and you can download it here.

It isn't exactly the same, of course. On my machine, there's a slight lag when the loop starts over, so there's a brief break in the music. The DOS version I used to run long ago never had that lag. Also, the only way I can stop it is to bring up the task manager and end the process. It's still worth watching, especially if you can remember how magical some things seemed on the computer 15 years ago.

You can read all about Tran, the demoscene and other things Tran created by following the link to his Wikipedia entry: Thomas Pytel.

P.S. It's even cooler if you watch it in the dark. Turn off everything except the computer and your sound system, sit back and enter the zone...
Posted by AlanDP at 2:58 PM