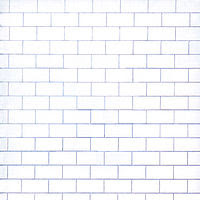 I'm not even going to pretend to write any kind of review or critique for this album. You already know about it, and if you don't, then what are you doing reading this?

My second-year college room-mate was an interesting character who hailed from Indonesia, although by heritage he was also half Japanese. He had come into an enormous record collection by fortune rather than design. He had several boxes full of records. Thanks to him, I got a lot of exposure to groups and artists who I most likely would never have heard of otherwise. He wasn't really a music guy, however. He said that his collection had been given to him by a friend who was "going back home" (I suppose either to Japan or Indonesia) and couldn't afford to ship them all back with him. I never counted them all, but I'd say there were several hundred, but probably less than 1,000. When the semester ended and I knew I wasn't going to be coming back, he told me I could pick out whatever I wanted from the collection and take it with me. I could have backed a truck up and loaded them all, but I didn't feel comfortable taking a bunch of his records, even with his permission. For one thing, I could tell that many of them either already had, or someday would have collectible value because they were rare imports that you couldn't just go out and buy in the U.S. So I picked out only two: The Wall and Yes' Going for the One.

This album had a big influence on me. I listened to it over and over and at one time had the whole album memorized word for word and note for note. In 1985 (I'd guess that was the year) I requested and received the book of the piano scores for it as a Christmas gift, and eventually added "Comfortably Numb" to my small keyboard repertoire.

I think I mentioned before that I never bought the CD because I heard two different CD releases and the sound on both of them totally sucked. So I just kept listening to tapes of these records, full of pops and clicks, but fortunately no skips. There came a point when the last tape finally wore out and I didn't bother recording it again--I had moved on, I guess. I tried making a tape from a co-worker's CD but due to the extremely low volume level of the CD (I said it totally sucked, remember?), the tape wasn't listenable even by my standards.

Thanks to modern technology and Goldwave, I now have a pretty good pop-free digitized version of the whole album.

In my opinion, The Wall must be taken as a whole. Many of the tracks are not really stand-alone songs, but musical bridges between the major points of the album. Still, "Comfortably Numb" is one of my favorite songs (regardless of artist or genre), and I still sing alone with it if I hear it on the radio or it turns up in the shuffle.

Oh yeah, and I bought the videotape of the movie back in the 80s also. I'll probably get the DVD version before too long. Or at least rent it from Netflix.

Amazon has samples of most of the tracks, although I can't imagine that anyone who reads this blog doesn't already own this album.