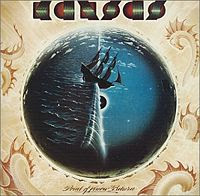 And here is the first album-length record I ever bought, not counting the single of "The Devil Went Down to Georgia" that I bought when I was 15. This one was probably purchased right around 1982, and I'm not certain why I did. I have a cousin who was a big fan of theirs back then, and he had been talking to me about them. Maybe that was why. I already had a decent collection of albums on cassette by that time, but I didn't have a turntable yet. However, my college room mate did, and I used his all the time. I probably got this one at the ACU bookstore. This is only one of several records that I bought before I owned a turntable myself. I think my room mate may have had this one on 8-track, so I was able to preview it before I bought it. I remember being with him at the store one day when he bought a new 8-track of Monolith.

I guess I don't need to go into talking about their music. They were quite popular, after all. I think I might be interested in hearing some of their older albums, but not any of their later ones, especially after the fiddle player dropped out and they went too far into the pop field.

Ripping results: a few very faint artefacts here and there, but nothing I can't live with.


Amazon has sound samples of all the tracks, in case you haven't already heard "Dust in the Wind" 8,000 times on your local classic rock radio station. The current CD issue has two bonus tracks that aren't on the original record. P.S. "Dust in the Wind" costs $1.29 to download instead of the usual 99¢. I guess it's still that much in demand.

In other news...yesterday, in spite of having a relatively easy day at work, I felt utterly horrible and barely had the energy to do anything. I blame it on staying up too late Sunday night and not getting enough sleep. But yesterday and through last weekend I got to the bottom of my ripping stack and went through the collection for another batch to rip. I also did some CDs that I missed or ignored previously, and found another stack of cassettes that should be worth ripping, a couple of them only so I can say how much I hate them.

Oddities: I somehow missed ripping my Sons of the Pioneers CD. That one's a puzzler. The real puzzler is how/why I did not have "Careful with that Axe, Eugene" ripped, when I had all the other tracks from Ummagumma. I don't have any idea how that happened, but it has been rectified.

So in the coming weeks, I should be covering such diverse artists as Wall of Voodoo, John Denver, Triumph and Al Jolson. And as they say on TV: and many, many more.
Posted by AlanDP at 3:16 PM