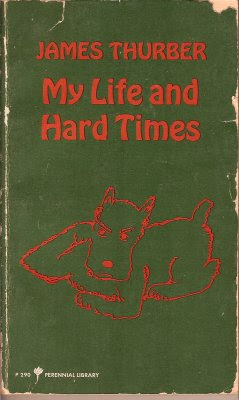 I chanced across this book on my shelf a few days ago and decided to read it again. I bought it somewhere used more than 20 years ago, and have read it several times. It always still makes me laugh. This is one of the books that I immediately took my grandmother and told her, "You have to read this." She told me she laughed so hard that she could hardly breathe.

It's a slim volume that consists of a collection of essay/tales about Thurber's boyhood and his odd and eccentric family. Are they all true? I don't know, but it doesn't matter, because it's the kind of humor that makes you think "I know someone like that."

Here is one of my favorite passages, about one of their long succession of maids/housekeepers.

Mrs. Robertson, a fat and mumbly old Negro woman, who might have been sixty and who might have been a hundred, gave us more than one turn during the many years that she did our washing. She had been a slave down South and she remembered having seen the troops marching--"a mess o' blue, den a mess o' gray." "What," my mother asked her once, "were they fighting about?" "Dat," said Mrs. Robertson, "Ah don't know." She had a feeling, at all times, that something was going to happen. I can see her now, staggering up from the basement with a basketful of clothes and coming abruptly to a halt in the middle of the kitchen. "Hahk!" she would say, in a deep, guttural voice. We would all hark; there was never anything to be heard. Neither, when she shouted "Look yondah!" and pointed a trembling hand at a window, was there ever anything to be seen. Father protested time and again that he couldn't stand Mrs. Robertson around, but mother always refused to let her go. It seems that she was a jewel. Once she walked unbidden, a dishpan full of wrung-out clothes under her arm, into father's study, where he was engrossed in some figures. Father looked up. She regarded him for a moment in silence. Then--"Look out!" she said, and withdrew. Another time, a murky winter afternoon, she came flubbering up the cellar stairs and bounced, out of breath, into the kitchen. Father was in the kitchen sipping some black coffee; he was in a jittery state of nerves from the effects of the day. "Dey is a death watch downstaihs!" rumbled the old Negro lady. It developed that she had heard a strange "chipping" noise back of the furnace. "That was a cricket," said father. "Um-hm," said Mrs. Robertson. "Dat was uh death watch!" With that she put on her hat and went home, poising just long enough at the back door to observe darkly to father, "Dey ain't no way!" It upset him for days.

Everyone should read this book.
Posted by AlanDP at 8:31 PM