Somebody somewhere is probably looking for this... 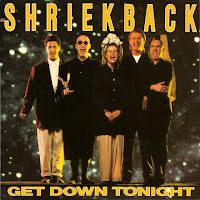 Shriekback, "Get Down Tonight (Acid House Mix)" 12-inch single. Actually Side A is the regular album version of the song, which is a cover of that sucky white-boy disco piece by KC and the Sunshine Band. I think that's who did it. This is one thing I would like to be wrong about to show how little I know about that kind of music, but one can't have everything. I think this version is better because of Barry Andrews' vocals--he always sings like he is smiling an evil smile.

Side B is the extended (almost 8 minutes) acid house mix, which, you know, is just stretched out with lots of repetition and the dance beat emphasized.

I would like to be very clear that I am not a dancer, and if I was, I would not dance to this kind of music (I envision myself as more of a mazurka type). But I like to hear this kind of thing turn up in the shuffle now and then to put a new spring in my step when I'm working.

So if you need a thumbnail of this for your files, grab it. It's the only one on the internet except for the one on some German site where they chopped off half of the "S."

One odd thing about this record is that on the record itself (but not on the jacket) it says it's a promotional copy and not meant for selling. However, I distinctly remember buying it. I guess someone in the record store decided to make a couple bucks under the table while no one was looking.

Ripping results: close enough to perfect after a few minutes work.
Posted by AlanDP at 6:40 PM