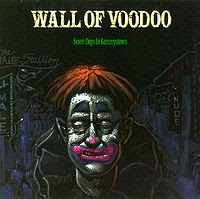 This is one of the albums that gave me hope that all was not lost when I was smack in the middle of the decade when all the music sucked.* Recommended to me by a co-worker, the first time I heard it, it immediately became one of my favorite albums and remains so to this day. I mean, this would be one of my desert island records if I were fortunate enough to be stranded on a desert island that was equipped with electricity and a stereo with a turntable. After I finished jerry-rigging a primitive spark-gap transmitter and had sent a Morse Code plea for help, I would listen to this record while waiting for the rescuers to arrive. If they got there before the album was finished, they would just have to wait.

This was their first album after Stan Ridgeway left the group to go solo and he was replaced on lead vocals by Andy Prieboy, who also was the primary songwriter for this album. The music is dark. It is bleak, somewhat twisted, mysterious and defiantly hopeful. It is quite heavily electronic, with three different members being credited as playing keyboards (one of them also covers the bass), and only one guitarist.

1. Far Side of Crazy - Inspired by or about John Hinckley, the guy who shot Ronald Reagan.
2. Business of Love - A strange song about two people who can't stand each other anymore but can't stand to be apart, either.
3. Faded Love - A very brief (1 minute) flirtation with country music with a nod to Patsy Cline. Voodoo had already shown country music influences earlier, when they covered "Ring of Fire" with Stan Ridgeway.
4. Mona - "Mona" being the moon, I'm guessing. I'm not entirely certain what this song is about, but sometimes I think it might be from the point of view of a werewolf.
5. Room with a View - A very snappy, fast-paced mostly spoken-word piece about someone who lives in the building next to the singer and who seems to have a parallel life with him. Or maybe he's just examining himself in a mirror.
6. Blackboard Sky - Another song with strange and mysterious lyrics. Possibly about someone who is contemplating suicide because of his broken heart. Every time I see trash tumbling across the street I'm reminded of these lyrics. "Fresh out of hell on a morning so cold and alone / Nobody there to say welcome home / So I roll like the leaves / I blow like the sand / And I tumble like a paper cup / That's caught in the wind..."
7. Big City - This one is about a couple who are moving to a big city to try and find a better life, but the singer is warning them about the dangers that can await them. Another reference to "paper cups" in this song.
8. Dark as the Dungeon - Another cover of an old country song, written by Merle Travis and made most popular by Johnny Cash. I think it could have been better if they had used more of the original stanzas and less repetition of the chorus, but it has still lodged in my mind as the version I always hear, and it has a rhythm as implacable as a pickaxe.
9. Museums - A song about visiting museums. Doesn't sound like much of a topic for a rock song, but it works. It has another favorite lyrical snatch of mine: "In museums full of teachers on their fieldtrips / (Or so they say)..."
10. Tragic Vaudeville - I think this song is about someone being driven nearly to madness because his lover died.
11. (Don't Spill My) Courage - And the album ends with a song of defiant hopefulness, or hopeful defiance.

There is not a weak song on the album. It seems to me that Prieboy poured all his darkness, anxiety, angst, and fear of insanity into every song. It's a shame that it wasn't more popular, but then in 1985 most people weren't really listening to this kind of music.

The album is not longer in print, and prices for hardcopies are high. Amazon currently lists one new one at $171, with used copies starting at $63. Fortunately you can download the mp3 version for less than $10, and they have sound samples of all tracks.

*I'm exaggerating, but only to make a point.
Posted by AlanDP at 9:19 PM