And once I played this thing... 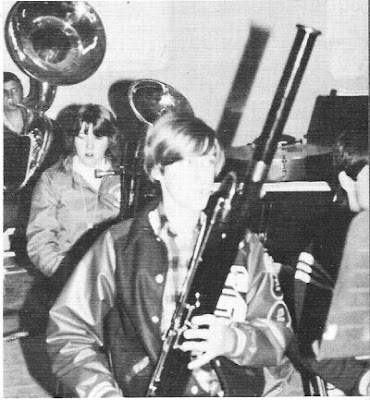 A scan of a not-very-good photo of myself from our junior yearbook. That year, I had been digging through the instrument room, where all the school-owned instruments were stored that nobody used, and I found a bassoon. I asked the band director if I could play it for concert season, and he readily agreed. He went and found me a synthetic reed--he apologized because it wasn't a "real" reed, but I didn't care and I had a blast. I played it for concert season in both my junior and senior year. I tried playing a bassoon in the college orchestra, but they gave me an extremely stiff cane reed and I couldn't get any sound out of it. I told the director that I had used a synthetic reed before and did great with it. He fumed and told me that no one was going to play "plastic" in his orchestra. I told him he better get me a real wooden bassoon then, because the one they issued me was made from plastic. He turned red and ignored me. I quit orchestra.

I loved digging out those low notes, which is probably why I also really enjoyed the baritone sax.

I had to buy my own straps for this bassoon, and I probably still have them around somewhere. The bassoon uses two straps, one neckstrap just like a sax neckstrap, and one seat strap that cups the bottom of the horn and which you sit on the other end to hold the horn up. Bassoon fingerings are quite complicated compared to the sax.
Posted by AlanDP at 8:22 PM