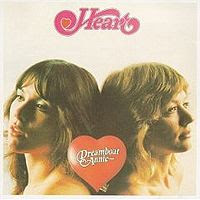 I must admit first that I have not heard every Heart album, but from the ones I have heard, their first is still their best. This is the album that produced two of their biggest hits, which are still mainstays of classic rock radio: "Magic Man" and "Crazy On You." Those are two of the harder-rocking tracks on the record, but they are not typical of the entire record. The songs span the range of rock, soft and hard, with even maybe a subtle hint of country here and there. My own personal favorite is "(Love Me Like Music) I'll Be Your Song."

This is an original print of the album from Mushroom Records. Some bigwig at Mushroom must have stupidly decided that their music couldn't stand on its own, so they took this photo of the bare-shouldered Wilson sisters for the cover and tried to portray them as lesbian lovers. The sisters, having never had any inclinations toward incest, were understandably outraged, so much so that they broke their contract with Mushroom. The record label then took a bunch of unfinished stuff that was left over from the Dreamboat Annie sessions and released it as the album Magazine. This brought a lawsuit from the Wilsons which resulted in the court forcing Mushroom to allow them to finish the tracks to their satisfaction and re-release it on their new label. Because of this, there are two versions of Magazine: the first from Mushroom and the second from Capitol. It was this incident which inspired Ann Wilson to write another of their big hits, "Barracuda."

Anyway, this is a great album without a weak song on it. It's still widely available and in print, with a sales rank at Amazon of around 2500. I didn't get a perfect rip of this one, with some artefacts left over here and there, so I might go ahead and get the CD sometime just so I'll have a flawless copy of it. If you like Heart but you don't have this album, you should definitely get it.