When you don't revisit your Netflix queue very often, you sometimes forget what you've added to it. 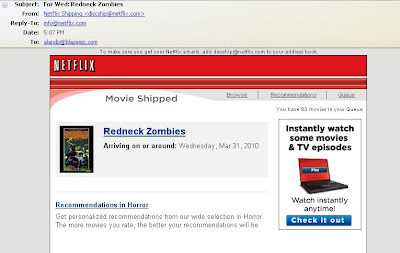 Hoo boy. You know, when I searched for this one I just did it to be silly--I never really expected them to have it. I was really surprised when I saw it was part of their inventory. This was one of my...er..."favorite" "so bad it's good" films (well, "films," since it was shot on videotape) from the videotape rental heydays of the 1980s.

After I found this one I quickly tried Shriek of the Mutilated but unfortunately Netflix doesn't have that one.

The last one I got from them was Billy Jack. First time I've seen that movie since the 80s. Still cool, but a lot of bad acting from the bit players.
Posted by AlanDP at 9:39 PM