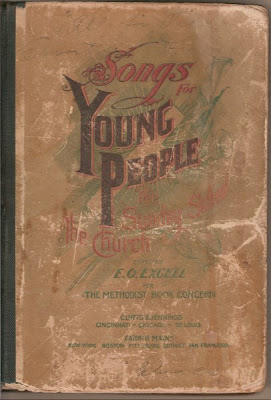 On the way home today it suddenly occurred to me that it was already Thursday. Not a sensation I'm accustomed to. Because of after-work activities on Tuesday and Wednesday, the week seemed to go by quickly.

Anyway, I got those hymnals in this week that I bought via eBay. The one pictured above was published in 1897, which makes it my oldest one. It's in amazingly good shape for such an old book, not much yellowing of the pages, even. It has some mildew smell, like an old book that might have been safely ensconced in someone's garage or some place like that for many decades.

Took a glance at one of the Mennonite books and saw many songs I'm familiar with. One interesting thing about it is that some of the songs have the words in both English and German. The covers are a dark brick-red color; at some point the spines were tastefully reinforced/repaired with maroon duct tape that matches the covers, which made me smile. When I was a kid and our congregation couldn't yet afford to buy a bunch of new hymnals, we fixed the spines of the old ones with regular silver duct tape which didn't really match the beige covers but still held the books together for several more years. I still have one of those old books, complete with duct tape, on my shelf. The music is written in the familiar (to me) 7-shape system. On many of the songs, they didn't bother to print a time signature, but so far it seems to me that all the ones they didn't print the time signature for are in standard 4/4 (or possibly "cut" time). It has an introduction that tells the process by which the book was published; apparently there are (or were) two main branches of the Mennonites who used two different books, and at one point they got together to create a book they both could use. It goes on to say that they went out of their way to preserve the original words from the original writers whenever possible, which increases its value to me personally. It was published in 1969.

The book pictured at the top, "Songs for Young People," is a Methodist book put together by E.O. Excell, whose name I have seen many times. Most of the songs were still very new at the time of publication--songs which have since become old standards. Fortunately their original copyright dates are printed with each song, except for a few that must have been "old" at the time and aren't dated. One odd thing about this book, which I have never seen before, is that the pages are numbered as well as the songs. In every other hymnal I've seen, only the songs were numbered. Some of the songs have piano notation instead of four-part harmony, but, as I once told my dad, I can fix that.
Posted by AlanDP at 8:19 PM