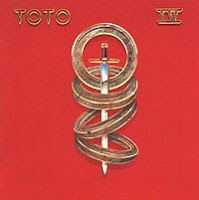 I hadn't gotten around to commenting on this recent LP rip. Not that it's important or anything, but I know there may be a couple of you who knew me in a past life and who are still slightly interested in my history.

Anyway, I looked this one up to see exactly when it was released: April 1982. So it was released the month before I finished high school. I was completely unaware of it until I began college that fall, so I always think of Toto as "college music." I'm pretty sure I didn't buy it until at least 1983, and this would have been among the first actual records I ever bought (as opposed to albums on cassette, which I began buying several years before then).

And I'm not sure exactly why I bought it, but it must have been because of the song "Africa." I'm fairly certain this was purchased at the ACU Bookstore when I was going to school in Abilene. I'll tell you one thing for sure: I did not buy it because of the song "Rosanna."

The college radio station played that song so much... I had mental pictures of the student announcers sitting there frantically checking their watches and screaming at each other ohmygodit'sbeenlikefiveminutessincewelastplayedrosannafortheloveofgodplayrosannaagainQUICK!!!

So...I will definitely add "Africa" to my general favorites list, and probably even to my special favorites list. "I Won't Hold You Back" and "Make Believe" will also go on my general favorites list, and maybe even a couple of the others after I've listened to it again. But "Rosanna" will never go on there. I got so sick of hearing that song almost 30 years ago that I still haven't recovered from it. They must have run that song 30 or 40 times for every one time they played any of the other three singles.

Ripping results were okay. Most of the tracks turned out fine after some editing. "Hold You Back" had some kind of foreign material stuck to the grooves that required extra cleaning before it could be ripped. Unfortunately (and ironically), "Africa" had damage to the grooves that I couldn't work around and in order to have my favorite song from this album, I had to buy the download from Amazon.
Posted by AlanDP at 5:49 PM