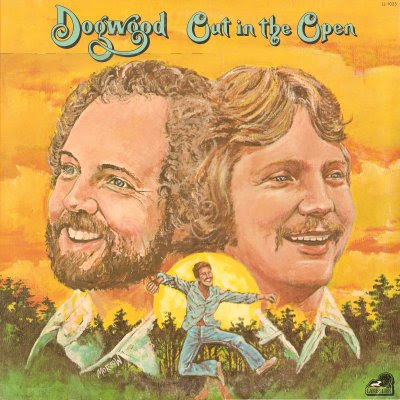 First I would like to make a clarification. There is a group called Dogwood who is currently extant who are a Christian punk group (the mere mention of such a genre has sent my curiosity meter to 20 over 9), but they are not this Dogwood.

When I was attending college in Abilene I walked into the dorm one day to find someone had put a bunch of junk they didn't want on the RA's desk in the lobby. By the way, the whole time I was there I think I saw the RA only one time, and that was for a little talk/sermon he gave to us about...er...um...uh...promiscuity, I guess is a good word for it. I remember the whole episode as being somehow awkwardly embarrassing yet disturbingly arousing. Anyway, all this junk had little price stickers on it and there was a small cardboard box to throw your money in for anything you wanted to take. There was this record there, so naturally I took it. The price sticker which I peeled off before scanning the cover says I must have paid 30¢ for it. Then I saw there were actually two records inside the jacket, the one that was supposed to be there and another different album by the same duo.

I found it to be a quite difficult task to find anything about this group on the internet. I finally came up with a mention of them that described them as Christian folk/country. It would have been more accurate to say they were extremely lame Christian folk/country. I listened to one of the records, then considered putting it back and taking back my 30¢, which after all was enough to pay for half of a honey bun, or 3/5 of a can of Mr. Pibb. But then I decided that no, I would keep it as a reminder that not every record is worth the 15¢ you pay for it. I never listened to the other record.

The cover art should have warned me off, but at the time I was thinking there was no way I could lose for only 30¢. I was wrong.
Posted by AlanDP at 8:44 PM