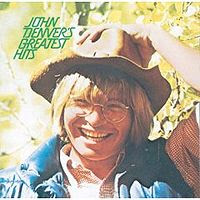 When I was a kid, this became my very first favorite album. It was a cassette that my mother had bought. In a previous post some time ago, I said that I thought I had bought a CD of it but hadn't. In combing through the shelves a few weeks ago, I noticed that I had bought the record. The one that I had tried to rip & convert before had been either my wife's or her mother's, and was in bad shape so I didn't get a very good rip. However my own record was still in quite good condition and I got a very good rip from it.

I also noticed that in the inherited collection there's the album that has "Some Days a Diamond, Some Days a Stone," which is another favorite of mine. I'll try ripping that one soon but I don't have very high hopes.

I still don't like "Sunshine on my Shoulders" though. And G-d help me if I ever hear "Annie's Song" again.
Posted by AlanDP at 8:57 PM